Istanbul to forcibly send some Syrian refugees to camps 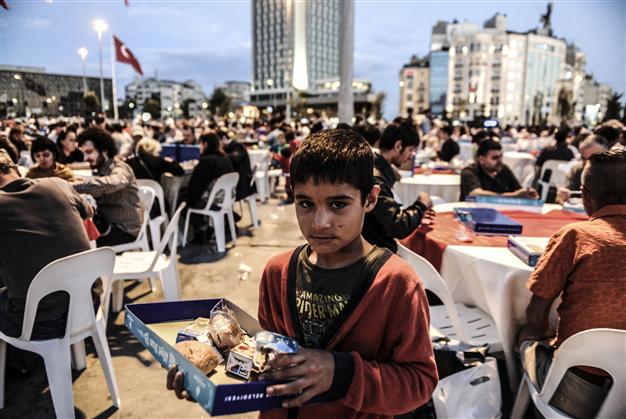 A Syrian boy stands with food he collected from tables after Turkish people break their fasting on July 4, 2014, at Taksim square during the holy month of Ramadan in Istanbul. AFP Photo
Share:
Istanbul Governor Hüseyin Avni Mutlu said on July 15 that new measures were being considered to deal with the rising number of Syrians living on the streets of Istanbul, which may include sending them to camps in the southeastern provinces even without their consent.

“Very soon we are going to initiate new and significant measures about this issue,” Mutlu told reporters on July 15, upon a question about the rise of Syrians living and begging in Istanbul streets since the start of the civil war across the border.

“In Istanbul, there is a group of middle-class Syrians with stronger educational backgrounds. But not all of them are like this. What concerns us are the Syrians who try to make a living by begging on the streets. In accordance with our regulations about beggars, the municipal police is obligated to prevent such activities. However, we still can see such incidents in places like Sultanahmet and Taksim Square,” he added.

Mutlu said Syrians had previously been hosted in two guesthouses in the city.

“As of last winter, we built two accommodation facilities, one in Tuzla, the other in Pendik, for homeless Syrian refugees. We hosted approximately 700 guests in these facilities for five or six months. More than 500 of them have now gone to [camps in the southeastern province of] Şanlıurfa of their own accord. The rest stayed in Istanbul to move to apartments. We are working on legislative amendments to send those [who remained in Istanbul and lack any accommodation] to the camps even without their consent. In the coming days, we will start a process that will give us much better results on this issue,” said Mutlu.

Mutlu also said the whereabouts of Syrians in the city was under strict monitoring, while also stating that their total official number was now at 67,000.

“Today, there are a large number of Syrian refugees in our country. We have recorded where they reside, how they make a living, their educational status, and other related information. As of now, we have 67,000 Syrian guests in Istanbul. It is impossible for this amount to increase. Over the last three months, this number remained almost the same,” he added.

Mutlu also said some Syrians who work with the Governor’s Office on the issue are also “uncomfortable” with those who live and beg in the streets of Istanbul.