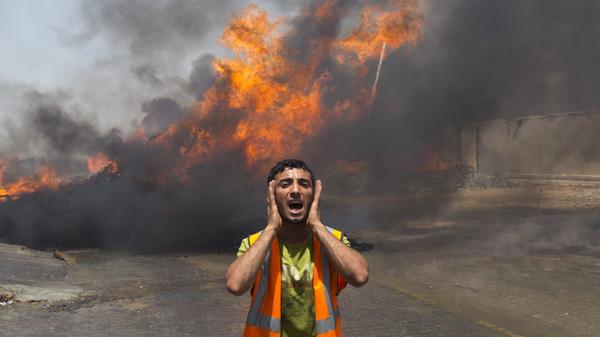 Palestinian firefighters try to extinguish a blaze at a United Nations storehouse after an Israeli military strike in an area west of Gaza City on July 12.
Share:
Despite a unanimous appeal from U.N. Security Council members, Israel and Palestinian militants traded more airstrikes and rocket fire Saturday, with at least one mosque and a center for the disabled among the latest structures hit in the Gaza Strip.

The number of dead in Gaza reached at least 159, Palestinian medical sources said, the majority of whom were civilians, according to the United Nations agency for humanitarian affairs. More than 1,000 people have been wounded.

Early Sunday, a heavy wave of airstrikes destroyed police stations and much of the security headquarters in the Tel Al Hawa neighborhood in the south of Gaza.

Separately, news reports quoted the Israeli military as saying four special forces soldiers were slightly wounded in a raid on a rocket-launching site in northern Gaza. It was the first time Israeli soldiers were known to have crossed into Gaza during the conflict.

The rising death toll has sparked international concern over the proportionality of Israel’s response to rocket fire from Gaza. The rockets have struck deeper into Israel than in past conflicts, but have caused only one serious civilian injury. There have been no Israeli deaths as a direct result of a rocket strike.

A unanimous statement by the 15 members of the U.N. Security Council, including the United States, called for the fighting to stop and for peace talks between Israel and the Palestinians to be revived. The council urged the two sides to resume the truce that ended the previous round of hostilities in November 2012.

The U.N. statement came on the fifth day of Israel’s aerial assault on militants based in Gaza.

Israel said a mosque that was hit in the Nusseirat area served as a weapons storage facility and a gathering place for militants.

Late Saturday, emergency services spokesman Ashraf Qidra said a house and a mosque were hit in the Tuffah neighborhood of Gaza City, killing 17 people — the largest death toll in any single airstrike during the Israeli campaign; 35 people were hurt.

Palestinian sources say all 17 were members of the extended family of the Hamas police chief, Tayseer Batsh, who was seriously wounded in the attack.

It was not clear why Israeli jets hit the center for disabled people. Residents told journalists that a dummy missile landed on the center’s roof before dawn as a warning of an imminent strike, but that not all of those inside, some of whom suffered from severe disabilities, could get out in time. Two people were killed.

Six people were killed in a home targeted by Israeli missiles. Two of the dead were reportedly nephews of Ismail Haniyeh, one of the most senior leaders of the militant group Hamas, which controls the Gaza Strip.

Militants launched more than 70 rockets into Israel on Saturday, fewer than in previous days. More than a dozen were intercepted by Israel’s antimissile shield. The Israeli army said initial reports indicated that at least two rockets were fired from Lebanon, as well. They landed in open areas, causing no injuries or damage.

Abeer Taleeb, who lives south of Gaza City, said the almost continuous stream of Israeli airstrikes had put her and her six children “in a state of constant fear.” A training site for Hamas fighters close to her home has been hit twice.

“I have tried to calm down my kids, who were screaming and crying, and trying to find shelter from fragments of glass that flew. I thank God that we survived,” Taleeb said. “Is this our fate to live through a war every two years?”

“It is clear that we need urgent, concerted international action to secure a cease-fire,” Hague said.

Hamas has vowed to continue firing rockets at Israel’s urban centers, where the loud wail of air-raid sirens has sent millions of residents from Tel Aviv to Jerusalem scurrying for cover over the last week.

Israeli Prime Minister Benjamin Netanyahu said that no amount of international pressure would stop his government in its drive to cripple militant groups in Gaza, including Hamas and Islamic Jihad. Israel has called up tens of thousands of reservists to bolster its regular military for a possible ground offensive.

A military spokesman told Israeli television that the army is considering asking residents of northern Gaza to evacuate the area because “we plan to strike that area very forcefully.”

Taleeb, 44, said she is most frightened by the prospect of a ground assault by Israeli troops. The last such incursion, which took place in late 2008 and early 2009 and lasted 22 days, resulted in more than 1,000 Palestinian deaths. Thirteen Israelis died, most of them soldiers. The last cease-fire, in November 2012, went into effect before Israel sent in the ground forces it was massing along the border.

Many Israelis, too, have been living in fear because militants’ rockets have reached farther into Israel than ever before, including one that almost struck the coastal city of Haifa, about 90 miles away.

More than a dozen mobile concrete shelters were deployed Saturday in the Israeli city of Beersheba for residents of the old neighborhood, who had no public or private shelters. The day before, the neighborhood suffered a direct hit from rockets that ripped through homes.

The only Israeli to suffer serious injuries from a Palestinian rocket attack was a man who was wounded Friday when a rocket hit a tanker near a gas station. Iron Dome, the Israeli missile-defense shield, has knocked out dozens of rockets, but the majority have landed, most in open areas.

The outbreak of fighting was precipitated by the kidnapping and slaying of three Israeli youths in the West Bank last month. Israeli authorities accused Hamas of being responsible and rounded up suspected militants throughout the West Bank. Early this month, a Palestinian teenager was found dead and burned, believed to be the victim of a revenge killing.

On the diplomatic front, the Obama administration has offered to facilitate a cease-fire. The U.S. and other nations are urging Egypt to play as active a role as possible; Cairo’s intervention was key to brokering the previous truce.

But Egypt’s influence in Gaza has waned since the installation of a government in Cairo that has shunned close ties with Hamas.