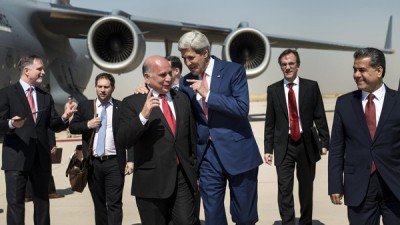 U.S. Secretary of State John Kerry (centre, R) talks with Fuad Hussein (centre,L), chief of staff at the presidency of the Kurdistan Regional Government. (Reuters)
Share:
The Kurdistan Regional Government (KRG) is seeking to win U.S. support for its push to become an independent state, taking advantage of the ongoing turmoil in Iraq and what it says is a failure of the central government in Baghdad.

At an event held at the Washington Institute in Washington, DC., last Thursday, Fuad Hussein, chief of staff of the KRG presidency, and Falah Mustafa Bakir, head of the National Relations Department of Kurdistan, addressed the future of the Iraqi Kurdish region and its relationship with Baghdad.

Hussein said the Kurdish region must be looked at differently now following the fall of Iraq’s second largest city of Mosul into the hands of Islamist militants on June 9.

Both Kurdish leaders said their region can no longer rely on the central Iraqi government. They were specifically critical of how Nuri al-Maliki’s government has not compensated Kurdish people for the atrocities committed under the Saddam regime, including the chemical gassing of Halabja, the killing of an estimated 180,000 people in the Anfal operations, and the destruction of thousands of villages by the Saddam’s regime.

Bakir said the Kurdish region’s isolation made it a target for accusations of dragging Iraq into failure.

“Sometimes as a result of our isolation, we would be accused and blamed for things we have not done, as there are some who are trying to blame the Kurds for the failure of Iraq. Indeed, we are the only ones who have participated heavily for the success of Iraq,” Bakir said.

Hussein also appealed for U.S. help to fight Islamist militants who have seized swathes of land in Iraq’s Sunni heartland.

“We’ve got our forces we don’t need United States forces there, but we need equipment.” Hussein said. “They (ISIS) have got the most sophisticated weapons systems in their hands, and they are all American weapons. They are American weapons, which had been given to the Iraqi army, and now they are in the hands of terrorists.”

Hussein also emphasized the KRG’s need for economic autonomy, and the key to that is the United States allowing the sale of Kurdish oil.

“We are not receiving money from Baghdad anymore. Since January, Baghdad is now 70 million over budget,” Hussein said. “We have got our oil. We can sell it and take care of our economy.”

“Everybody knows that there is a new reality in Iraq. So, there is movement to understand the new reality,” Hussein said. “In our discussions here in Washington, we feel that they are ready to listen.”

The United States has not expressed support for Kurdish drive for independence. The State Department has recently said that a unified Iraq is key to fighting extremism in the country.