Hamas steps up rocket fire and Israel calls up reserves 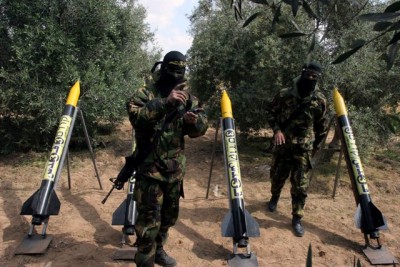 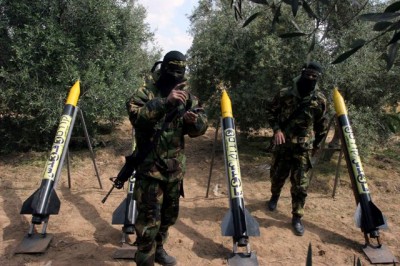 Hamas stepped up rocket fire at southern Israeli towns and Israel called up reserve troops on Monday in anticipation of a possible escalation of hostilities with the Islamist group that dominates the Gaza Strip.

The armed wing of the Palestinian group said it fired dozens of rockets within about an hour, after hundreds since mid-June.

Israel said more than 40 rockets were launched as militants’ funerals were held in Gaza. Thirty struck inside Israel and the rest were shot down by rocket interceptors, the army said.

Hamas has vowed revenge for what it saw as Israel’s deadliest attacks in which six Palestinian militants died, though Israel denied any involvement. The surge in violence has raged since the kidnapping and killing of three Israeli youths last month and a Palestinian teen last week.

Air raid sirens wailed as far north as the outskirts of Tel Aviv and Jerusalem. Israeli police said those were false alarms, but the military said rockets had triggered alerts as far as 80 kilometres from Gaza, the farthest of the latest crisis.

Military spokesman Lieutenant Colonel Peter Lerner said the rocket fire at Israel from Gaza by Hamas fighters meant that “now the Israeli military is talking about preparedness for an escalation”. It had called up several hundred reservists and was prepared to mobilise a total of 1,500.

Prime Minister Benjamin Netanyahu’s security cabinet decided in consultations on Monday to step up air strikes against militants in coastal Gaza, but stopped short of deciding on a ground offensive for now, political sources said.

Netanyahu has pledged “to do whatever is necessary” to restore quiet to southern Israeli communities but cautioned against any rush toward wider confrontation with Hamas, whose arsenal includes long-range rockets that can reach Israel’s heartland and its business capital Tel Aviv.

“A situation in which a terrorist group has hundreds of rockets which it can decide any moment to use is intolerable,” Lieberman told a news conference. “There have been suggestions that we wait … but I don’t know what we’re waiting for.”

Hamas claimed responsibility for firing rockets at Israel on Monday for the first time since a 2012 war with Israel that ended in an Egyptian-brokered truce.

It was enraged after its armed wing said six of its members were killed in Israeli air strikes on Monday, and another was pulled from the rubble, seriously wounded.

The death toll was the highest Hamas has suffered since the 2012 fighting.

The Israeli military said its aircraft had targeted “terror sites and concealed rocket launchers” in the enclave, but had not hit the southern Gaza area of Rafah, on the Egyptian border, where the Hamas gunmen died.

Military spokesman Lerner said the militants had died when explosives went off in a tunnel that Israel had bombed several days ago, fearing gunmen planned to use it to try and penetrate into Israel.

The Hamas fighters had apparently gone there to inspect the damage, he said.

The Gaza flare-up began in mid-June during Israel’s search for the three teens, when Israel arrested many Hamas members across the West Bank. The Israeli military says more than 160 Gaza rockets have struck Israel since.

Tensions between Israelis and Palestinians have risen over the killing of three Jewish teenagers in the occupied West Bank, which Israel has blamed on Hamas, and of a 16-year-old Palestinian in East Jerusalem.

Mohammed Abu Khudair’s death has touched off clashes between police and stone-throwing Arab protesters in East Jerusalem and in several Arab villages in northern and southern Israel. Police said they arrested 30 people during violence on Sunday night.

Israel on Sunday announced it had arrested six Jewish suspects in what police believe was the revenge murder of Abu Khudair, whose charred body was found in Jerusalem on Wednesday, a day after Naftali Fraenkel and Gil-Ad Shaer, both 16, and Eyal Yifrah, 19, were buried.

The three Jewish seminary students went missing while hitchhiking on June 12. Hamas has neither confirmed nor denied having any role in their disappearance.