Pressure increases on Iraqi PM Nouri al-Maliki to step down 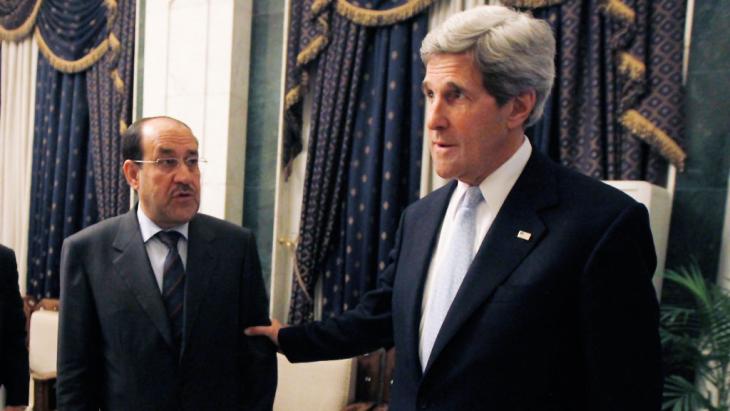 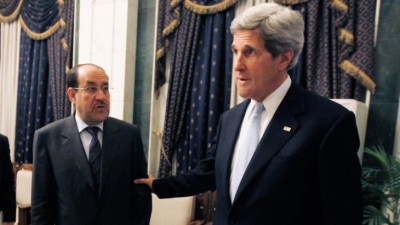 Iraqi parties raised pressure on Prime Minister Nouri al-Maliki to step down, as the U.S. said it drew pledges from the embattled leader and other top Iraqi politicians to begin forming a new government by July 1.

The Obama administration is betting that a new more conciliatory leadership—with or without Mr. Maliki—that unifies Iraq’s sparring sectarian parties will help neutralize the mounting threat posed by Islamist insurgents in Iraq by undercutting their political support.

U.S. and Iraqi officials met in Baghdad on Monday as the Islamic State of Iraq and al-Sham, or ISIS, made further alarming advances across Iraq.

On Monday, the Sunni extremists launched an attack on a police convoy just 20 miles from Baghdad’s center that left at least 81 people dead, a day after they captured nearly all of Iraq’s remaining border crossings with neighboring Jordan and Syria.

“This is clearly a moment when the stakes for Iraq’s future could not be clearer,” Secretary of State John Kerry said after meeting with Mr. Maliki in Baghdad. “[ISIS’s] campaign of terror, their grotesque acts of violence and repressive ideology pose a grave danger to Iraq’s future.”

Mr. Kerry said President Barack Obama maintained the right to strike ISIS targets at any time now that the U.S. military moved military assets into the region, including U.S. aircraft carriers stationed in the Persian Gulf.

Still, some U.S. officials were skeptical that Mr. Maliki or other Iraqi politicians would respect the July deadline or whether the leader intended to even follow the political process in a quest for a third term.

Mr. Maliki has shown no signs of yielding power after his coalition won a plurality in the April 30 elections. And despite American signals in recent days that the White House would like Mr. Maliki to step aside, U.S. officials stressed that Mr. Kerry didn’t ask Mr. Maliki to do so during their meeting.

Instead, the U.S. secretary of state emphasized the need for a new government in Baghdad to do more to reach out to Sunnis and Kurds, something the Americans have signaled they don’t think Mr. Maliki, a Shiite, can do.

However, the political horse-trading expected to come with the formation of a new Iraqi government could breathe even more instability into Iraq by creating a power vacuum, some observers say.

If Mr. Maliki does step aside, it is unclear whether Iraq’s fractious political system could produce another viable candidate among the multiple Shiite, Sunni and Kurdish parties to replace him.

“We know that a lot of [lawmakers] are against Maliki,” said Zaid al Ali, an Iraqi-American based in Cairo who advises on constitutional law and author of a recent book on Iraq. “But there aren’t any other candidates who have a sufficient amount of support yet to become prime minister.”

In addition, Iran, which exerts much influence over Iraq, will help decide whether Mr. Maliki will remain in power and is unlikely to consent to anyone who isn’t close to its interests.

“Either it gets someone more pro-Iranian than Maliki, or it escalates the crisis from zero to 10,” said Ramzy Mardini, a former adviser to Vice President Joe Biden.

Against this backdrop, other Shiite politicians discussed with Sunnis and Kurds ways to find a replacement for Mr. Maliki, said people who are part of the talks.

One figure emerging as a possible Maliki successor is Ahmed Chalabi, a Shiite politician and former businessman who was one of the architects of the U.S.-led invasion of Iraq.

Mr. Chalabi was a confidante of many of the war planners inside the George W. Bush administration ahead of the 2003 invasion. A U.S. congressional probe subsequently accused Mr. Chalabi of feeding bogus intelligence on Saddam Hussein’s alleged weapons of mass destruction program to justify his overthrow. Mr. Chalabi denied wrongdoing.

Mr. Chalabi, who won a seat in the recent parliamentary elections, recently held meetings with U.S. Ambassador to Iraq Robert Beecroft and Deputy Assistant Secretary of State Brett McGurk, said a person familiar with the meetings.

Other possible Maliki successors include senior members of his cabinet, such as National Security Adviser Falih al-Fayadh. Mr. Fayadh’s history as a negotiator among different sects has positioned him well as a consensus candidate, said one Iraq politician.

Another potential candidate, lawmakers said, is Ayad Allawi, a secular Shiite politician whose party won the most seats in 2010 parliamentary elections.

“The key today was to get from each of the government leaders a clarity with respect to the road forward in terms of government formation,” Mr. Kerry said at the U.S. Embassy in Baghdad. “And indeed, Prime Minister Maliki firmly, on multiple occasions because it was a great part of the conversation, affirmed his commitment to July first as the date.”

Iraq held parliamentary elections in April, and the results were ratified by the country’s judiciary last week. Under the Iraqi constitution, parliament must convene and first elect a legislative speaker and national president, before then choosing a prime minister.

Mr. Maliki’s leadership also has been questioned by Iraq’s most powerful Shiite voice, Ayatollah Ali al-Sistani, who indicated Friday that Mr. Maliki should recast his approach or consider stepping down.

Among the Iraqi politicians Mr. Kerry met Monday were Ammar al-Hakim, chief of one of Iraq’s largest Shiite parties, the Islamic Supreme Council of Iraq, and a potential kingmaker in the deliberations over a new government.

Mr. Kerry also met with the speaker of the Iraqi parliament, Osama Al Nujaifi, who is one of the highest-ranking Sunni officials in Iraq. The two men discussed the growing threat ISIS poses to both Iraq and the wider region, officials said.

“These are difficult times for Iraq and the world if we don’t cooperate,” Mr. Nujaifi told Mr. Kerry ahead of their meeting, these officials said.

As Mr. Kerry visited Baghdad on Monday, the U.S. government was preparing to beef up its military support for the Iraqi government, responding to a request from Baghdad. U.S. officials said that more supplies in the form of ammunition, light arms and aerial munitions will be shipped to western Iraq in coming days.

U.S. officials also said on Monday they had secured legal protections from Iraq’s government for 300 American special-operations forces being sent to Iraq to advise the Iraqi military.

“President Obama has not declared that he will wait” for Iraq’s political process to play out if he decides military action is warranted, Mr. Kerry said. “The president is prepared to take action when and if the president decides that is important.”