Judge Who Sentenced Saddam Hussein to Death Executed by ISIS 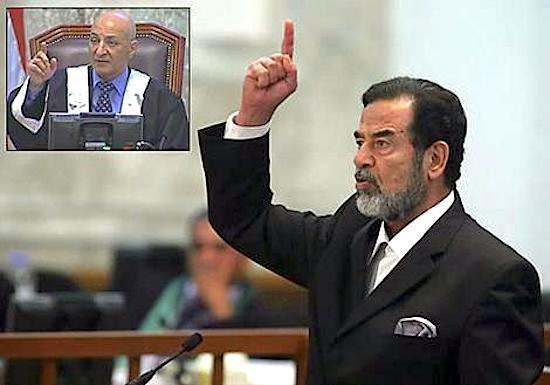 The judge who sentenced former Iraqi dictator Saddam Hussein to death in 2006 has been captured and executed by the Sunni Islamist rebels as they march towards Baghdad.

Raouf Abdel Rahman is believed to have been detained and executed by the militants of the Islamic State of Iraq and the Levant (Isis) last week as an act of revenge against the Shiite-led Iraqi administration.

The Iraqi government is yet confirm the execution but it has not denied it either.

“Iraqi revolutionaries [Isis militants] arrested him and sentenced him to death in retaliation for the death of the martyr Saddam Hussein,” said Jordanian lawmaker Khalill Attieh on his Facebook page.

Local reports suggest that the former judge tried to escape from the militants’ clutches in disguise but was recaptured and killed.

Having captured vast areas in Iraq, the Islamic insurgents are determined to establish an extremist caliphate.

The jihadists’ relentless surge to capture the capital has reportedly caused great concern among the people.

“Our politicians have so far succeeded in one thing. They have created an atmosphere of distrust between the city’s Shiites and Sunnis. Weapons are everywhere in the city. That tells me that instability is here, and disaster is on the way,” a 45-year old local named Yasser Farouq was quoted as saying by the New York Post.

Meanwhile, the UN has said the death toll in the ongoing conflict has already crossed 1,000 for the month of June.

Both civilians and security personnel have become victims of extra-judicial killings.