Syria warns U.N.: aid delivery without consent is an attack 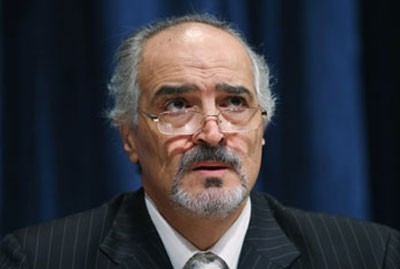 By Michelle Nichols
UNITED NATIONS – Syria’s government warned the U.N. Security Council that delivering humanitarian aid across its borders into rebel-held areas without its consent would amount to an attack, suggesting it would have the right to retaliate against convoys.

As the veto-wielding members of the council – the United States, Britain, France, China and Russia – negotiate a draft resolution to boost aid access, Syria circulated to the 15-member council a letter from dozens of Arab and Syrian lawyers.

The June 18 letter, obtained by Reuters on Friday, argues against a bid by Western states for the resolution to be Chapter 7, which would make it legally binding and enforceable with military action or other coercive measures such as sanctions.

The humanitarian resolution text was drafted by Australia, Jordan and Luxembourg.

“The sole purpose of the initiative is to use United Nations auspices for the delivery of logistical backing to the terrorists,” the lawyers wrote in the letter that was sent to the United Nations by Syrian U.N. Ambassador Bashar Ja’afari.

U.N. Secretary-General Ban Ki-moon on Friday told the Security Council in a report, obtained by Reuters, that the United Nations was ready to put in place “speedy, pragmatic and practical arrangements at critical border crossings” to deliver more aid.

“Such arrangements would allow United Nations convoys to cross the border into Syria – in their own vehicles, without the need for specific permits or visas – to deliver urgently needed relief to people in need,” Ban wrote in the report.

Amid the resolution negotiations, Russia said on Tuesday it has gained Syrian approval to open four border crossings named in the draft text under a “far-reaching formula.” U.N. diplomats said this involved using monitors to inspect convoys.

But Australia’s U.N. Ambassador Gary Quinlan said on Thursday that the proposal “is not good enough” yet.

The lawyers stated that the Syrian government’s refusal to allow aid deliveries without its approval “is grounded in and motivated by the Charter of the United Nations, international resolutions and Syrian counterterrorism legislation.

“If anyone describes it as arbitrary, we invite them to provide the legal bases for their novel argument, which amounts to saying that the only way to protect civilians from terrorism is not to fight it, but to work with it,” they said.

Russia, supported by China, has previously vetoed four resolutions threatening any action against its ally, Syrian President Bashar al-Assad. Moscow has made clear it was against allowing cross-border access without the consent of Syria’s government and opposed a Chapter 7 resolution.

The Security Council achieved rare unity in unanimously approving a resolution in February that demanded rapid, safe and unhindered aid access in Syria, where a three-year civil war has killed more than 150,000 people.

But that resolution, which was legally binding but not enforceable, has failed to make a difference, Ban said in his fourth monthly report to the council on Friday on its implementation.

“There has been no improvement in achieving sustained humanitarian access to all people in need within Syria, in particular those in hard-to-reach areas,” Ban wrote.

Ban said efforts to expand humanitarian assistance had “been met with continued delays and obstruction” – a combination of insecurity, the absence of agreements between parties for the delivery of aid and government bureaucratic obstacles.

“New government truck sealing procedures introduced in April failed to improve the reach of humanitarian aid, and in fact resulted in fewer people being reached than in May,” he said.