Lebanon urges US to resolve dispute with Israel over maritime borders 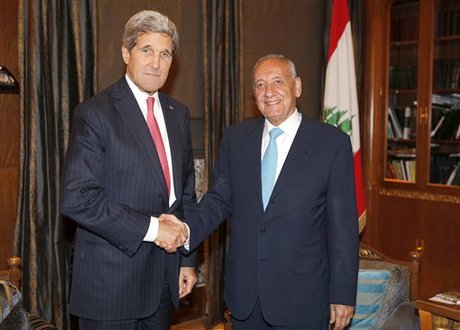 Secretary of State John Kerry shakes hands with Lebanese parliament speaker Nabih Berri in Beirut, Wednesday, June 4, 2014. The political stalemate that has left Lebanon without a president at a turbulent time in the region is “deeply troubling,” Kerry said Wednesday. He also announced new aid to cope with the Syrian refugee crisis that has spilled over into its besieged neighbor. (AP Photo/Mohamed Azakir, Pool)
Share:
Lebanon parliament speaker Nabih Berri urged the US to continue its efforts to resolve a dispute with Israel over exploiting natural gas reserves under the Mediterranean, local media reported .

Kerry paid a surprise visit to Lebanon Wednesday during which he met PM Tamam Salam and Christian Maronite Patriarch Bechara al Rai in addition to Berri.

A 2010 U.S. Geological Survey report estimated the presence of 1.7 billion barrels of oil and 122 trillion cubic feet of gas in the 83,000-square-kilometer area off the coasts of Lebanon, Israel, Syria and Cyprus, which is known as the Levant Basin.

In December 2012 the U.S. drafted proposed maps based on versions submitted by both Lebanon and Israel that delineate the maritime economic borders where each country can claim the right to explore for natural gas. To date, no agreements have been made.

The U.S. push to find a solution to the Israel-Lebanon maritime dispute is part of a broader policy aimed at bringing stability to the region.

The US has asked Lebanese officials to hold off on drilling in disputed waters until a final deal on borders was reached.

The Mediterranean sea has become a new frontier of energy exploration with foreign investment lured in to prospect via deep-water drilling.

Producing natural gas could potentially fix some problems, like Lebanon’s chronic electricity shortage. Lebanon’s power plants are so stretched that even Beirut’s more upscale neighborhoods see government-supplied electricity cut for several hours a day. Outside the capital, power is even more sporadic.

Lebanon’s power plants currently run on imported fuel. The state electricity company operates at a loss and blames it on factions that don’t pay their bills, a possible reference to Hezbollah and Amal Movement supporters who reportedly killed or injured several electric bill collectors that showed up in their strongholds .