Syrian election: a show of power not an exercise in democracy 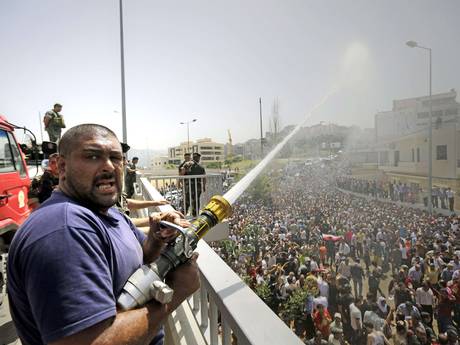 A fireman sprays water on Syrian expatriates living in Lebanon to keep them cool, as they arrive to cast their ballots in their country’s presidential elections (Getty)
Share:
BY:PATRICK COCKBURN
Thousands of Syrians, desperate to vote for President Bashar al-Assad, mobbed the Syrian embassy in Beirut on Wednesday, struggling with Lebanese soldiers as they tried to reach four ballot boxes inside the embassy building set high on a hill overlooking the city.

The well-guarded embassy is difficult to reach at the best of times, and it does not take many of the 1.1 million Syrian refugees in Lebanon to try to enter it at the same time to create traffic jams and for crowds to get out of control.

Chanting “With our souls, with our blood we will sacrifice for you Bashar” and “Long live Syria”, the crowds were intending to vote early in the 3 June election. Some will be genuine supporters of Mr Assad, who is seeking a third seven-year term, while others believe that if they do not vote they may have difficulty renewing their passports or face other bureaucratic problems.

“I came to vote for President Bashar Assad because we love him and he is a good man,” said Abraham Dekermenjian, a Syrian of Armenian descent from the war-devastated city of Aleppo.

Wahid Ibrahim al-Beik, 30, who works as a minibus driver in Lebanon, had a Syrian flag tied around his neck and a headband that read: “Syria is protected by God.”

The clashes at the embassy at Yarze, close to the Lebanese Defence Ministry, underline the desperation of Syrian refugees who exist in a sort of legal limbo. Some said they had been threatened by Syrian officials that they or their relatives at home would face punishment if they did nor vote. But given the extreme confusion, as soldiers lashed out with batons as they tried to control the masses of people making for the small number of ballot boxes, it would be impossible for anybody to know who had voted.

The presidential election – which Mr Assad will inevitably win – is a public rejection of demands by the opposition and its foreign backers that he should leave power. The US insisted that the only purpose of the Geneva II peace talks in February was to discuss a political transition. It was never likely that Mr Assad would accept this, as he currently holds 13 out of 14 Syrian provincial capitals and his forces are slowly advancing in many parts of the country.

It is impossible to know, in the middle of a savage civil war, about the true state of public opinion in Syria or among Syrian refugees abroad. In private, Syrians often express loathing for both government and opposition for ruining the country.

Mr Assad has a hard core of support among Syria’s minorities such as his own Alawite community, Christians, Shia and Kurds who believe that, if the opposition wins, they will be massacred or forced to flee. But many Sunni are fearful of what would happen if al-Qa’ida type jihadists such as the Islamic State of Iraq and the Levant (Isis) and Jabhat al-Nusra (JAN), which dominate rebel-held areas, were to take power.

Syrians have seen pictures of opponents of Isis who were crucified in a main square in the Euphrates city of Raqqa recently. In Deir ez-Zor, another city in the east, JAN militants from the local Sharia court beat and detained women who were not wearing full Islamic dress and who had listened to music at a wedding party in a private house.

People started arriving at dawn at the embassy in Beirut, which is reached by walking up a steep slope and then through a search area before getting to the embassy building. Some had walked several miles because the road was blocked by cars and pick-ups carrying the Syrian white-red-black flag.

Syrians know that it is wise to show fulsome and very visible support for which ever side in the civil war it is politic to cultivate. Thus, the metal gratings of shops in Damascus have all been painted with the national colors.

The US may soon sign off on training and equipping supposedly moderate rebel forces, according to officials in Washington, while trying to keep sophisticated weapons out of the hands of al-Qa’ida- linked movements. Rebels report being taken to Ankara where they are questioned by men whose identity they do not know but who they suspect are CIA. If they persuade their interrogators they are suitable, they are then flown to Qatar to be trained in guerrilla techniques such as ambushes and the use of high-powered weapons.

For some time the US and Saudi Arabia have been trying in vain to create a southern front in Jordan which would operate against the Syrian army.

Assad’s forces have had a series of successes this year by sealing off rebel-held areas in Damascus and Homs and then negotiating a rebel withdrawal or ceasefire. It recently took over the Old City of Homs, which it had besieged for two years, and 1,200 rebel fighters were allowed to withdraw with their personal weapons. In return, the rebels allowed humanitarian convoys to reach two besieged pro-government Shia towns, Nobl and Zahraa, west of Aleppo, and released pro-government captives.

The Syrian army is still short of combat troops and attempts to keep its casualties low by sealing off and bombarding rebel enclaves. The rebel military forces have been seeking to show that they still have the capability to strike back in the lead-up to the presidential election by blowing up the Carlton Citadel Hotel in Aleppo with an underground mine on 8 May, killing some 30 soldiers. They also fired a mortar bomb into a pro-Assad election rally in Deraa in the south, killing at least 20 people.

Government success in getting people to vote and the opposition’s attempts to stop them are demonstration of power rather than an exercise in democracy.