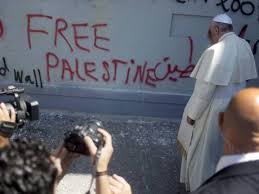 The Pope visited a memorial to Jewish victims of terrorism Monday after Israel demanded the gesture following his decision to pray at the foot of the giant concrete wall that symbolizes the divisions between Palestinians and Israelis.

Israeli officials were angered by the Pope’s impromptu initiative on Sunday at the separation barrier on which “Free Palestine” was scrawled in graffiti, which they felt handed a propaganda victory to the Palestinian population.

Benjamin Netanyahu, the Israeli prime minister, made it plain that the visit to the memorial had been at his instigation but the sour undertone to the visit was still on display when he publicly bickered with the Pontiff over the language of Christ.

“Jesus was here, in this land. He spoke Hebrew,” the prime minister told the Pope at their meeting in Jerusalem.

“He spoke Aramaic, but he knew Hebrew,” Mr. Netanyahu shot back.

Biblical scholars said both men were right – while Christ’s mother tongue was Aramaic, he would have known Hebrew.

Deciding, in the words of one Israeli official, not to “get mad but to get even”, the hosts had earlier made strong representations to Vatican planners that the Pope should pray at the memorial on Jerusalem’s Mount Herzl in a demonstration of the need for the barrier to protect citizens from suicide bombers.

“I want to thank the Pope for accepting my request to visit this memorial,” Mr Netanyahu said, adding that the wall had saved “thousands of lives — after it was set up, the terror stopped.”

He pointedly showed the Argentine Pope a section of the memorial dedicated to the victims of the bombing of a Jewish association in Buenos Aires in 1994. Pope Francis was an auxiliary bishop of the Argentine capital at the time.

Asked how the Pope was persuaded to visit the memorial, the official replied with irony: “I cannot explain it. It’s a miracle. There were diplomatic contacts … let’s just say it was a mixture of divine inspiration and a miracle.”

Israeli officials accused the Palestinians of “politicizing” the papal trip in order to score “a public relations victory,” and said they had responded in kind.

The row was a vivid reminder of the political and religious minefield that the Pope entered on his three-day visit to the Holy Land, which took in Jordan, the biblical town of Bethlehem and Jerusalem.

Vatican officials reluctantly admitted that the Israelis had been angered by the Pope stopping at the separation wall, on the outskirts of Bethlehem, but insisted that he was praying for peace for the entire region and that the gesture was not meant to have been partisan.

“I was not surprised because here [in this part of the world] you take certain actions and there are always different interpretations,” said Father Federico Lombardi, the Vatican spokesman. “There was some difficulty [among the Israelis] in interpreting the positive side of his act.”

After praying at the memorial, the Pope described terrorism as “evil” and “fundamentally criminal.” He further appeased Jewish sensibilities by visiting the Yad Vashem memorial, where he described the Holocaust as “a boundless tragedy” that had claimed the lives of six million Jews, and met elderly survivors of Nazi concentration camps.

He prayed in silence for some minutes, surrounded by the inscribed names of some of the most notorious death camps, including Auschwitz and Buchenwald.

Earlier in the day, the Pope prayed at the Western Wall, the holiest site at which Jews can pray. He left a copy of the Lord’s Prayer, which he had handwritten in his native Spanish, in a crack between the giant stones.

The 77-year-old Pontiff was briefly heckled by a group of ultra-Orthodox youngsters who shouted “Tragedy, horrible!” in Yiddish.

The Pope was also shown around the nearby Al-Aqsa compound, the third holiest site in Islam, and entered the blue-tiled Dome of the Rock, with its shining golden cupola, Jerusalem’s most recognizable landmark.

As the finale to his visit to the Holy Land – only the second overseas trip of his papacy – he said Mass in the Cenacle, a stone-walled room where, according to tradition but with scant historical evidence, Jesus had his Last Supper before he was arrested and crucified.

As the gruelling, whirlwind trip came to an end, a tired-looking Pope Francis flew by helicopter to Tel Aviv and then by plane back to Rome with his entourage.