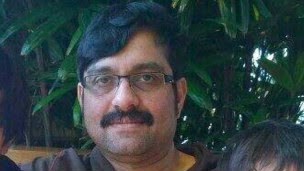 The two gunmen riding a motorcycle shot Mehdi Ali Qamar 10 times at close range in the central town of Chanab Nagar, police officer Shaukat Ali said, adding that Qamar’s wife and son were not harmed. He is survived by two other sons.

The officer said the family arrived two days ago from their home in Ohio, for a visit and that the cardiologist had planned to treat patients at the nearby Tahir Heart Institute. Ali said the killers’ motive is not yet known.

Jason Elsea, from the Ahmadiyaa Muslim Community in Columbus, Ohio, said Qamar was from Pickerington and had a practice in Lancaster. Qamar had recently taken a sabbatical to volunteer at the heart hospital.

“Many doctors from the U.S. have visited this hospital to help those in need,” Elsea said in a statement. He said Qamar’s sons were ages 2, 6 and 16.

Dr. Abdus Malik, Qamar’s friend and hospital colleague in Ohio, said he had made summertime trips over the past several years to do work at the institute.

“And this time they wouldn’t let him come back,” he said. “Just because the difference in our faith, they want to kill us.”

Malik said Qamar is originally from Pakistan but has been an American citizen for at least 10 years after moving to the U.S. in the 1990s for medical training.

He said the Qamar’s eldest son remained in Ohio, and his 6-year-old son was in Pakistan but not with his parents at the time of the shooting.

Ahmadis follow the self-proclaimed prophet Ghulam Ahmad and consider themselves Muslims, but are forbidden from presenting themselves as such by Pakistani law. They have long been targeted by Islamic extremists, and earlier this month a member of the sect accused of blasphemy was shot dead by a gunman who walked into the police station where he was being held.

Saleem Uddin, a spokesman for Ahmadiya Jamaat Pakistan, an organization representing Ahmadis, condemned the “brutal murder of this doctor who served fellow human beings without discrimination.”

He said the attack was part of campaign against Ahmadis and the heart institute, and came after leaflets appeared declaring that treatment there was forbidden by Islamic law.

“In order to put a stop to murders in the name of faith it is essential to put a ban on hate-promoting literature, and those who are legitimizing murder of innocent people should be brought to justice,” he said.