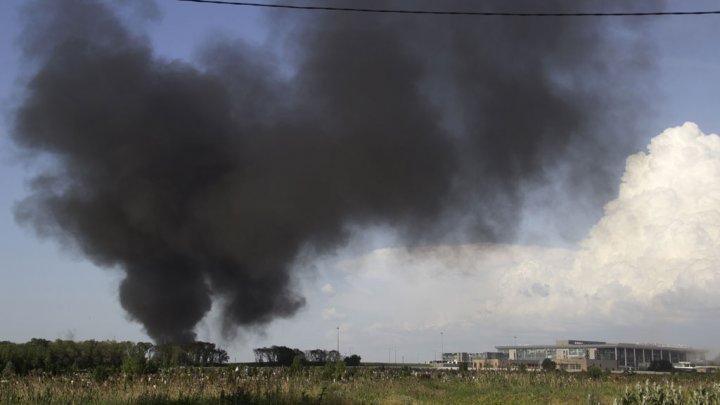 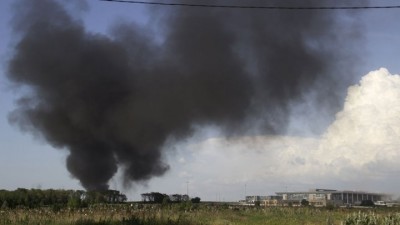 Ukraine said that dozens of pro-Russian separatists were killed in fighting around a regional airport that continued for a second day on Tuesday, forcing schools to close and residents to flee.

“The airport is under our full control,” Interior Minister Arsen Avakov said on Tuesday. “The enemy suffered serious losses and we have lost none.”

He estimated that dozens of separatist fighters had been killed, and said the combat operation was continuing to drive out the remnants of the pro-Russian forces.

Alexander Lukyanchenko, the city’s longtime mayor, said up to 40 people were killed, including two civilians hit by stray bullets in the area, and 43 wounded. Rebel fighters told local media that as many as 100 separatists were killed.

Gunfire and explosions rang out again Tuesday and people living around the airport hurried away. The mayor urged people within 3 miles of the airport to stay indoors and said dozens of schools in the area had been closed.

Donetsk, a city of about one million, is the capital of the industrial Donetsk region, which is largely controlled by the separatists. The city had seen little fighting until Monday, as the local authorities had put up little resistance to the takeover two months ago. Armed militants are rarely seen in the center of the city, although they control the roads going in and out.

The new fighting comes despite signs of a thaw in the standoff between Ukraine, backed by the West, and Russia over the unrest in eastern Ukraine, following the election of a pro-Europe billionaire, Petro Poroshenko, as Ukraine’s new president on Sunday.

Moscow has signaled it is ready to reduce tensions by saying it wants to engage in dialogue with the new president and by failing to recognize a claim of independence by the separatists.

The more conciliatory tone appears to have reduced the chances that the West will impose punishing new economic sanctions on Russia, at least for the time being.

On Tuesday, European Union diplomats said following a meeting in Brussels that no additional sanctions would be imposed now, but preparations for possible further steps would continue.

President Barack Obama called Mr. Poroshenko on Tuesday to congratulate him and to pledge U.S. support as he works to unify Ukraine, the White House said in a statement that did not mention sanctions.

Two weeks ago, President Vladimir Putin ordered tens of thousands of Russian troops stationed on the Ukraine border to withdraw, but the ferocity of the fighting in Donetsk could put pressure on Moscow—which has repeatedly said it reserves the right to protect ethnic Russians in eastern Ukraine—to take action.

Russia’s Foreign Minister Sergei Lavrov demanded the government in Kiev end military operations against civilians and urged both sides to cease fighting. He called on Mr. Poroshenko to engage in dialogue with the citizens in Ukraine’s east and said that if the newly elected president does that, he will find a “serious and reliable partner” in Russia.

Ukraine’s Foreign Ministry accused Russia of doing nothing to stop the flow of irregular fighters and weapons across the border into Ukraine to join the separatists.

Mr. Lukyanchenko, the Donetsk mayor, said eight of the wounded there came from parts of Russia, including Chechnya, Moscow, Krasnodarsky Krai (home to the Black Sea resort of Sochi) and the recently annexed Crimea.

Ukraine’s presidential administration said that border guards had turned back an attempt early Tuesday by a convoy of trucks and cars carrying militant fighters to cross into the country from Russia. Three cars were destroyed and five militants were captured while the rest fled back to Russia, the government said.

The border unit of Russia’s Federal Security Service denied that any armed men had been allowed to illegally cross the border, according to the Interfax news agency.

On Tuesday, the burned-out remains of two heavy flatbed trucks painted military green that had been used by separatist fighters were seen on the road leading to the airport in Donetsk.

One apparently struck a tree while making a sharp turn and flipped on its side about 2 miles from the airport late Monday. Local residents said they had seen the bodies of three people following the crash.

A second vehicle about a mile closer to the airport was riddled by bullets and was surrounded by pools of blood. A rebel fighter carrying a mortar quickly ushered reporters away from the wreck.

Mr. Lukyanchenko said militants had entered a school near the airport and demanded mattresses for wounded fighters. They then left but the school was closed as a precaution. Roads near the airport were blocked off and public transport in the city was heavily disrupted.

Overnight, armed men broke into the local hockey arena, looting televisions and communication equipment and setting the building on fire, the team said. No one was hurt, but the arena was heavily damaged.

Ukraine’s presidential website also said an air raid destroyed a militant training camp in the Luhansk region, next to Donetsk.

The Organization for Security and Cooperation in Europe said that it had lost touch with a four-person team somewhere near the border of Donetsk and Luhansk Monday night. The OSCE said it had informed the national government and regional authorities of the situation.

In early May, separatists held a group of OSCE military observers for more than week near the eastern city of Slovyansk after militant leaders accused them of being spies.

Russia and Ukraine took tentative steps during talks in Berlin on Monday toward resolving a fight over unpaid natural-gas bills. But on Tuesday, authorities in Kiev said they were prepared to bring the matter to court if a reasonable solution couldn’t be found and demanded compensation for the loss of Crimea, which Russia annexed in March.