Lebanon is again without president as Suleiman bids farewell 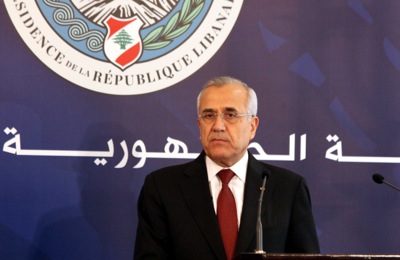 Outgoing President Michel Suleiman spoke Saturday during a farewell speech to end his six-year term and  called for the country’s squabbling politicians to choose a successor to his post as he steps down.

Lebanese politicians haven’t been able to agree on a successor to Suleiman, whose term ends Sunday.

Once again Lebanon is without president, as  it struggles to deal with the fallout from the civil war in neighboring Syria.

The absence of a president is  a setback for  all the Lebanese  but specially to Lebanon’s Christian community, whose influence has diminished since the country’s 1975-90 war. The Christian community  lacks the kind of leadership that is capable of unifying their ranks to build a strong state

In Lebanon’s power-sharing system, the president must be Maronite Christian  , the prime minister a Sunni Muslim and the parliament speaker a Shiite Muslim.

A two-thirds quorum, or 86 of the legislature’s 128 members, is required for an electoral session to elect the president.

Lebanon has become   accustomed to lurching political crisis, and the country’s  government under PM Tammam Salaam  will administer until a new president is selected.

The country went for months without a president before Suleiman, a former army commander, was elected in 2008.

The absence of a president  erodes Lebanon’s fragile institutions that keep the country of Christian and Muslim minority sects together.

The constitutional amendments Suleiman suggested included “restoring the right for the executive power to dismantle the Parliament under the initiative of the president and giving the president the right to call for an exceptional Cabinet session when needed.”

Suleiman also called for reconsidering the authority of the Constitutional Council and the appointment of its members and its quorum so that it does not get obstructed again, in reference to last year’s stalemate in the council over a challenge to the extension of Parliament’s mandate.

Other reforms included giving a specific constitutional deadline to Cabinet to sign decrees and laws as is the case for the president. Suleiman also said that Parliament should place urgent draft laws rejected by the president and sent back to Parliament on the latter’s first session to be held thereafter.

The president also said that he would sign a decree that calls on Parliament to hold an extraordinary session to address a new draft law for the parliamentary elections set for November and the controversial salary scale draft law.

“I will sign today a decree to call on Parliament to hold an exceptional session as the country is facing parliamentary elections, which requires setting a new electoral law,” Suleiman said.

“The general situation might also witness urgent issues, and our political system requires Parliament to hold a session to question the Cabinet,” he added.

Suleiman called on the youth to form nonsectarian groups and engage in establishing a civil state.

The president also highlighted the need to set a national defense strategy for the country, an issue that he pushed for throughout his tenure.

“I suggested to the National Dialogue Committee a proposal for the defense strategy, and on the eve of May 25, the memory we are proud of, I say it is time to build a national defense strategy because this would be an essential gateway to the emergence of the state,” he said.

May 25 marks Liberation Day, when Israel withdrew from south Lebanon in the year 2000, ending its occupation to the country.

Suleiman also hailed the efforts of the International Support Group for Lebanon, established in New York last year, to help the country cope with the Syrian refugee crisis and enhance Lebanon’s military capacities.

He said that the Lebanese state should follow up on the resolutions of the support group and expressed hope that the conference scheduled on June 17 in Italy would “promote the capacities of the Army.”

Lebanon recently received a $3 billion Saudi grant to buy equipment and arms for the military, a donation that Suleiman hailed during his speech as a “historic one.”

There was no sign of any Hezbollah representatives at the ceremony. Notably absent from the ceremony   were Hezbollah’s allies  such  as parliament Speaker Nabih Berri ,FPM leader Michel Aoun, Marada Movement leader Suleiman Franjieh . 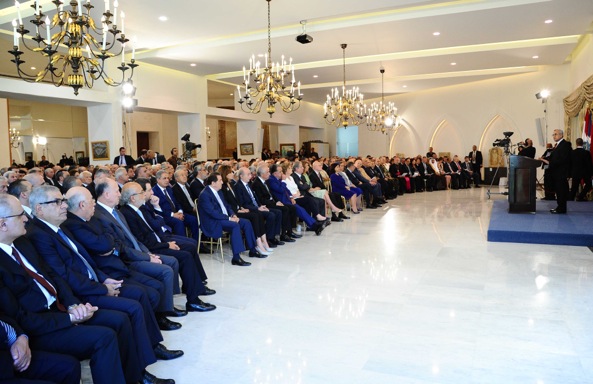