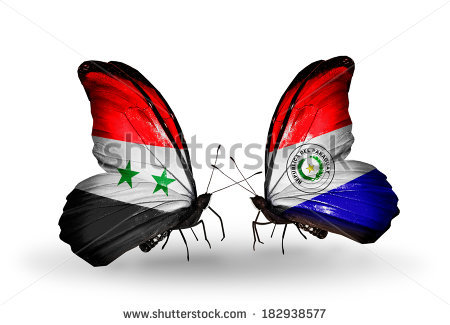 Syrian flag left and Paraguay flag. While Paraguay is the happiest country according to Gallup poll, Syria is the unhappiest
Share:

Paraguay is the happiest country in the world, with 87 percent of residents scoring high on an index of positive emotions, according to the latest Gallup poll on well-being.

Not surprisingly, Syria, suffering through a civil war, is the unhappiest and people there are so badly off they’ve hit a new low, the survey finds.

Overall, 70 percent of adults worldwide say they are frequently laughing, smiling or enjoying themselves. The United States comes in the top one-quarter, with a happiness score of 78, the same as Chile, Argentina and Sweden.

Jon Clifton, managing director of the Gallup World Poll, says he is not surprised at the findings. “We know in Latin America culturally, there are a lot of highly positive emotions,” he said. “It is a pretty emotional culture.”

Gallup surveyed 1,000 adults in each of 138 countries to make up the index. They asked five questions: whether people felt rested, felt they were treated with respect, laughed or smiled a lot, whether they experienced enjoyment and whether they had learned or done something interesting the day before.

Gallup then makes up a Positive Experience Index score for each country. Most of the happiest countries are in Latin America, the survey finds. The five top countries all are:

Gallup worked with Healthways,a company that promotes and studies well-being, to develop the index. While the five simple questions point to basic well-being, it’s important to take a deeper dive also, says Clifton.

“What we wanted to find out was what was driving those five things,” Clifton said. A big factor is workplace, or school for students, he said. “Another is financial well-being.” Sense of community is also important.

And it’s important to see whether negative experiences outweigh positive ones. It doesn’t happen in Latin America, where people reported both the highest positive emotions and the highest negative emotions — and yet still ended up on top in terms of well-being.

“You take two middle-aged women, one that has a child and one that does not have a child,” said Clifton. “Which one evaluates her life the higher? It is the one that has the child. Who has the most stress and also the most sadness? It is also the one with the child.”

Ongoing research show the United States consistently scores poorly in workplace happiness, Clifton says — especially on Wednesday. U.S. happiness peaks on weekends. “We need to do a better job of understanding workplace happiness,” Clifton said. “People will take paycuts in order to do jobs they love.”

Gallup takes the measure to heart. Clifton says Healthways came in and assessed Gallup’s employees, and the scores indicated they could feel better on community measurements. So they made changes. “We do a range of things where the office will get together and say ‘let’s choose an emphasis on community well-being’ and we choose five non-profits and get involved in them,” Clifton said.

Did it make people happier? “It certainly improved their well-being,” he said.