Libya’s oil rebels side with General Haftar against Islamists 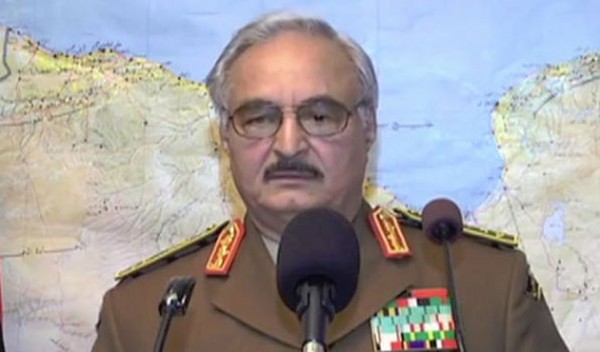 A rogue general in Libya who’s confronting Islamist militias and seeking to shut down the country’s parliament gained support in the east of the country among both soldiers and some separatist groups.

As Libya’s government accuses Haftar of attempting a coup, his forces put on a show of strength at both ends of the country, attacking Islamist groups in Benghazi and storming the parliament in Tripoli. The fighting is the latest evidence of the breakdown of authority in the oil-rich north African nation three years after the overthrow of Muammar Qaddafi.

Conflicts in Libya, where oil production has slid to less than a fifth of its capacity, helped drive up the price of Brent crude by as much as 18 percent to $117.45 a barrel between April and August last year. Brent for July settlement traded at $109.37 a barrel at 4:15 p.m. in New York yesterday.

Oil-producing regions haven’t been affected by the latest violence, according to Mohamed Elharari, a spokesman for the National Oil Corp.

The Executive Office for Barqa, the group seeking autonomy in eastern Libya, said it backs Haftar’s operations. In another blow to the Tripoli government, the leader of the army’s special forces in the east, Colonel Wanis Abukhamada, said that he was joining forces with Haftar’s rogue unit.

In a statement on Al-Nabaa TV, Abukhamada said Haftar’s campaign is targeting “gangs of extremists” that have taken the lives of many Libyans, including members of the security forces. “Anything that jeopardizes the lives of civilians or the nation will be crushed,” he said.

Haftar’s National Army is deploying tanks and artillery to Tripoli, according to its Facebook page. In the capital, the head of the General National Congress summoned the Libya Shield militia to defend “vital facilities” after the assembly was raided by supporters of Haftar two days ago, according to the official news agency Lana.

Libya’s governments since the fall of Qaddafi have failed to disarm the rebel groups that helped overthrow him, weakening central authority in the country. Crude production declined to 215,000 barrels a day last month after export terminals in the east were seized by the separatists.

Saudi Arabia, the United Arab Emirates and Algeria were among countries that said they were shutting their embassies in Tripoli and sending staff home. The United Nations mission in Libya urged all sides to “cease all military action” and called on the government to “quickly address the lawlessness.”

“If push comes to shove, the conflict could spin out of control and oil production could be further disrupted,” said Theodore Karasik, director of research at the Institute for Near East and Gulf Military Analysis in Dubai. Islamist groups could retaliate against the Barqa rebels for backing Haftar, he said.

Haftar defected from Qaddafi’s army in the 1980s, finding refuge in the U.S. He was one of the commanders of the rebellion that broke out in February 2011 in Benghazi and ended Qaddafi’s 42-year rule. He declared his intention to “rescue” the country in February this year. The government dismissed his claim at the time, saying Haftar had no authority.

On May 18, his ally, Mukhtar Fernana, declared that parliament had been disbanded after his militia stormed the assembly. Nuri Abu Sahmain, the head of parliament, denied that it had been suspended and said he was running it from a “safe place.”

Two people were killed and 66 wounded in the Tripoli clashes, according to Al Jazeera. At least 70 people have been killed and 141 injured since fighting broke out in Benghazi on May 16, according to the Health Ministry.