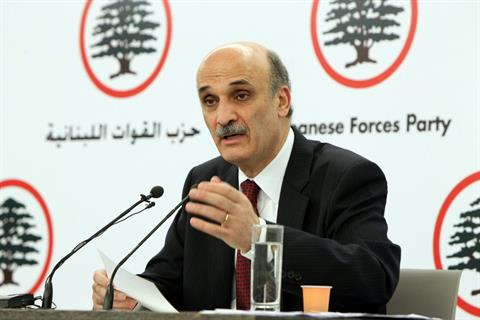 “Some media outlets reported that Geagea quoted former Prime Minister Saad Hariri as proposing Free Patriotic Movement leader MP Michel Aoun as a consensus candidate , and that is erroneous, incomplete and inaccurate,” the LF office said in a statement in reference to the LBC report that was widely quoted by lebanese media on Monday.

“Will he ( Aoun) relinquish his MOU with Hezbollah.? This is the key issue here .
Geagea added the ” ball is now in Hezbollah’s court. Let it declare its candidate.”

Earlier in the day LBC quoted Geagea as saying during a press conference that was held in Paris as saying ” Hariri’s proposal suggesting Change and Reform bloc leader Michel Aoun as a consensus presidential candidate, was unworkable due to Aoun’s political past”.

“Aoun cannot be considered consensual after all his political practices that are based on his memorandum of understanding with Hezbollah.” LBC reported Geagea as saying.

In 2006, Aoun’s party, the Free Patriotic Movement, signed a Memorandum of Understanding with the Shiite party Hezbollah. The document provided a number of conditions for disarming the party and placed heavy emphasis on normalizing diplomatic relations with Syria.

The agreement reportedly gave the Iranian backed Hezbollah militant group the Christian political cover to initiate the 2006 war with Israel and to send fighters to Syria to help the embattled president Basher al Assad against the mostly Sunni rebels who are trying to end the Assad dictatorship.

Over 162, 000 have died so far in the Syrian conflict according to activists including 485 Hezbollah fighters

Update: former PM and current Future Movement bloc leader MP Fouad Siniora said that his bloc will release a statement to clarify the confusion following the meeting between Hariri and Geagea.

He added: ” We will participate in Thursday’s session to elect a new president and Geagea is our only candidate.