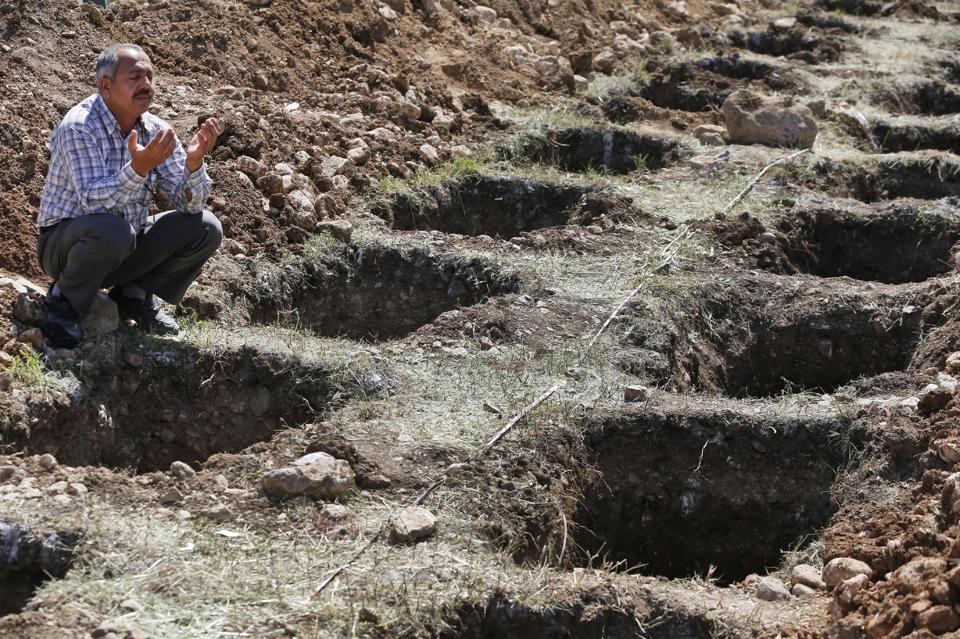 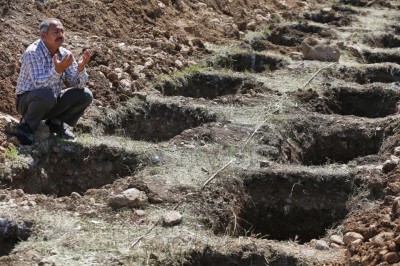 With photos of their loved ones pinned to their chests and chanting the names of lost miners, grieving relatives laid their dead to rest in mass burials Thursday, as gravediggers labored to make room for scores more victims of Turkey’s worst mining disaster.

“The love of my life is gone,” women wailed loudly, swaying and singing improvised laments about the departed as bodies were lowered, one by one, into the freshly dug graves.

Rescue teams recovered another nine victims, raising the death toll to 283 from Tuesday’s disaster, with at least 140 miners believed still trapped underground, according to government figures.

Rage blended with grief as revulsion over poor safety conditions and what some perceived as government indifference set off protests across Turkey. “It’s not an accident, it’s murder,” read a banner waved by trade unionists who marched through the streets of Istanbul.

The disaster has stirred up new hostility toward Prime Minister Recep Tayyip Erdogan’s government and thrown his presidential ambitions off stride. Blackening his reputation further, Turkish newspapers published a photograph Thursday of one of Erdogan’s aides kicking a protester who was being held on the ground by armed police.

At a graveyard in the mining town of Soma, where coal has been the main industry for decades, mourners said they spent their whole lives fearing a disaster like Tuesday’s, in which an explosion set off a deadly fire just as workers were preparing for a shift change, trapping hundreds underground. No miner has been brought out alive since before dawn Wednesday.

Raw: Violence Follows Turkey Mine DisasterPlay VideoRaw: Violence Follows Turkey Mine Disaster
“The wives of the miners kiss their husbands in the morning. When they come back, even if they are five minutes late, everyone starts calling, said 45-year-old Gulizar Donmez, whose husband and father are both miners and whose neighbor was among the victims. “You never know what is going to happen.”

Energy Minister Taner Yildiz said the search for survivors was being hampered by a fire that had spread to a conveyor system — engulfing a 650-foot (200-meter) stretch of tunnel — but progress was made Thursday toward extinguishing it. Rescue operations have been suspended several times as fire created toxic fumes and too-risky conditions for rescuers.

Emergency crews detected a drop in carbon monoxide levels “which means that the fire has gotten smaller,” Yildez said.

Erdogan, who is expected to announce his candidacy soon for Turkey’s presidential election in August, was greeted by angry protests during a visit to Soma on Wednesday after he referred to mining accidents as “ordinary things” that “happen all the time.”

The Turkish leader was forced to take refuge inside a supermarket after angry crowds shouting “Murderer!” and “Thief!” — in a reference to alleged corruption — clashed with police.

An Erdogan aide, Yusuf Yerkel,” was photographed kicking a protester being pinned to the ground by special forces police.

Yerkel issued a statement Thursday expressing regret, but also claimed he was provoked. “I am sorry that I was not able to keep calm despite all the provocations, insults and attacks that I was subjected to,” he said.

In contrast, Turkish President Abdullah Gul, visiting Soma on Thursday, referred to the mine explosion as “a huge disaster,” adding: “The pain is felt by us all.”

The mood was more restrained than during Erdogan’s visit, though townspeople angry at what they said was the slow rescue operation shouted at him, demanding that more be done to reach possible survivors.

Erdogan has made no secret of his desire to become Turkey’s first popularly elected president. His party swept local elections in March despite a corruption scandal that forced him to dismiss four government ministers and has also implicated him and family members. Erdogan denies the allegations, saying they are part of a plot to bring his government down.

In the Black Sea port of Zonguldak, site of Turkey’s previous worst industrial accident, where a 1992 gas explosion killed 263, miners gathered but refused to enter a mine. At the protest in Istanbul, trade union groups tried to march to the local social security department but were blocked by police and staged a sit-in instead.

Authorities said the disaster followed an explosion and a fire at a power distribution unit, and most deaths were caused by carbon monoxide poisoning. The government said 787 people were inside the mine at the time and that 383 were rescued, many with injuries.

Erdogan has promised a thorough investigation and Hurriyet newspaper reported that a team of 15 prosecutors has been assigned to the inquiry.

Turkey’s Labor and Social Security Ministry said the mine had been inspected five times since 2012, most recently in March, when no safety violations were detected. But the country’s opposition party said Erdogan’s ruling party had voted down a proposal to hold a parliamentary inquiry into several smaller accidents at mines around Soma.