Ukraine helicopter downed as fighting resumes in the east 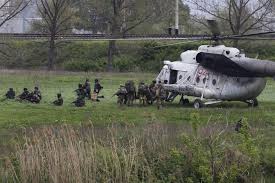 The fierce fighting in Slovyansk, a separatist stronghold, broke out as the Ukrainian government sought to regain control of the key Black Sea port of Odessa, dispatching a special police unit to that city after deadly clashes there between rival mobs supporting Ukraine and Russia.

The day brought new setbacks to Ukrainian forces, with four troops killed and helicopter shot down by rebel forces in clashes near Slovyansk that spanned several hours.

It was the fourth Ukrainian helicopter to be shot down in a three-day stretch. In a visit to a checkpoint near the fighting, Ukraine’s acting defense minister, Arven Avakov, acknowledged that his country’s military was weak, after years of neglect, and lacked basic supplies.

“Understand the real situation,” Avakov said, wearing combat fatigues and a black bullet-proof vest. “Our army has been destroyed methodically for the past few years. We don’t have a normal army. We don’t have the appropriate special forces. What is happening now is a combat shakedown, the first in the past few years. We are figuring out who is who, who imitates and who is really not afraid.”

The military’s struggle to retake rebel-held cities in the east is mirrored by the police force’s inability to maintain law and order, an impotence pro-Russian militants are exploiting to the full.

Monday’s clashes came just as life was beginning to return to Slovyansk, a city of around 125,000 people, with pedestrians strolling across the central Lenin Square and light traffic wending its way through the heavily barricaded, potholed and tree-lined streets, and past decrepit Soviet-era apartment blocks.

The relative calm was shattered in mid-morning by a loud explosion and the sound of sporadic gunfire.

Barricades of tires, sandbags, trees, concrete blocks and old trucks had been almost deserted before the explosions, but were quickly manned by jumpy armed men; both the rebels and Ukrainian army closed the roads in and out of the city for several hours.

The Ukrainian military helicopter was shot down by heavy machine gun fire near Slovyansk at about 2:30 p.m. local time, the Defense Ministry announced. The Mi-24 helicopter crashed in a river, and its pilots were rescued by Ukrainian security personnel, the ministry said.

Also on Monday, the government of neighboring Moldova, with its large Russian-speaking population, placed its borders on alert, citing the unrest in Ukraine.

The war of words between Russia and Ukraine continued to escalate, as Russia condemned the Ukrainian push against the separatists in the east, who want to see the region aligned with Moscow.

“The Kiev organizers of terror against their own people should think again, and stop the bloodshed, remove troops and finally sit down at the table of negotiations to start normal dialogue on ways to solve the political crisis,” the Russian Foreign Ministry said in a statement. Ukrainian, U.S. and European officials have said that Russia has a hand in the unfolding chaos.

In Kiev, the Ukrainian government announced that it was temporarily closing all checkpoints and border crossings between Ukraine and Crimea, which Russia annexed in March, because of continuing unrest in the region.

The closures also effectively halt travel by boat and airplane from Ukraine to several cities on the Crimean Peninsula, which juts into the Black Sea.

In addition, Ukrainian authorities set up roadblocks around the capital, Kiev, as a preventive measure leading up to an important national holiday, acting President Oleksandr Turchynov said Monday. In a statement on his official Web site, Turchynov said the extra security is a precaution against possible “provocations” by pro-Russian separatists ahead of Victory Day this Friday.

The May 9 holiday marks Nazi Germany’s capitulation to Soviet forces in World War II and has long been celebrated with patriotic fervor by Russians, Ukrainians and other nationalities that formed the old Soviet Union. Ukrainians worry that the holiday could inflame passions among pro-Russian separatists, who have cast themselves as the historic liberators of Ukraine and their opponents in Kiev as “fascists.”

Along with the the four Ukrainian troops who were killed on Monday, some 30 were wounded, the government said. Rebel accounts of casualties on their side varied widely from four to 20 dead.

Rebels accused the army of inflicting civilian casualties on Monday; the Interior Ministry said rebels had taken shelter in residential areas, using civilians as human shields. It was not possible to independently confirm the claims by either side.

Avakov, the acting interior minister, told reporters that the security forces’ advance was being slowed by strict orders not to fire on civilians.

“We are tied down by the civilian population,” he said, according to the Interfax news service. “Some people support us and some do not. It doesn’t matter. The Ukrainian military cannot shoot civilians.”

At one point, rebels fired on a minibus ferrying wounded soldiers out of the combat zone, Ukraine’s state security office said, but the bus was armored and further deaths were avoided.

The city is now encircled by Ukrainian security forces, the Defense Ministry said, although civilian traffic is being allowed to pass army and rebel checkpoints most of the time, albeit after searches and questioning.

But just a short drive south, the towns of Kramatorsk and Konstantinovka remain in rebel hands, with barricades of their own flying the black, blue and red separatist flag.

In Odessa, a special police battalion was deployed by the central government to help restore order, Avakov said. The move came a day after pro-Russian militants attacked a police station in Odessa and freed 67 of their allies, who had been detained during violent clashes Friday.

Avakov said the Kiev-1 police battalion had arrived in the country’s third-largest city to calm tensions that spiked when local police were unable — or unwilling — to control pro-Russian mobs. Avakov, in a posting on his Facebook page Monday, said the failure of the local police to keep order in Odessa was an “outrage” and possibly criminal in nature.

The special police unit, he said, was recently formed with the assistance of “citizen activists,” presumably to ensure its loyalty to the acting government. Avakov also said the entire leadership of the local police had been dismissed, and he pledged an investigation of their role in the violence.

As questions arose about the effectiveness and loyalty of the police in restive areas of the country, Turchynov, the acting president, said the government was forming special police units and reshuffling the leadership of several local police forces.

On Friday, 46 people died in clashes and a fire in Odessa , marking the worst day of violence in Ukraine since pro-Moscow president Viktor Yanukovych fled to Russia in February.

The spread of the violence to Odessa has raised the stakes dramatically in the Ukrainian crisis, bringing the conflict between pro-Russian and pro-Ukrainian forces to the country’s most important port.