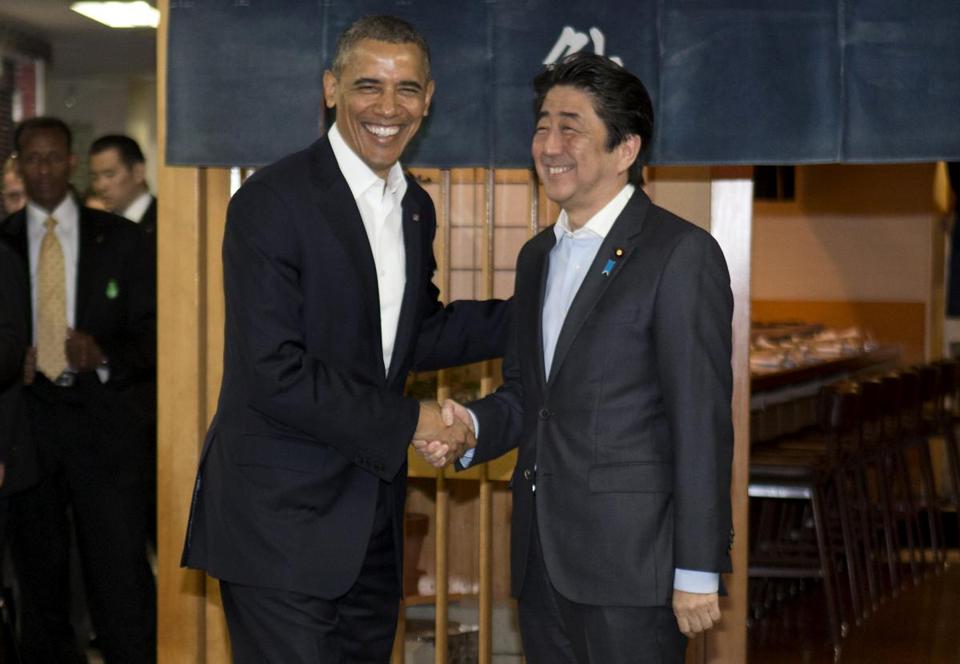 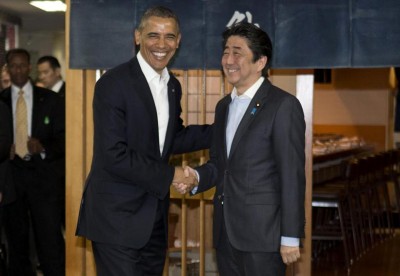 U.S. President Barack Obama has said Washington welcomes China’s rise but that engagement with Beijing would not come at the expense of its Asian allies – as Chinese state media greeted his arrival in the region with a broadside accusing the United States of wanting to “cage” the emerging superpower.

The reassuring remarks aimed at Japan and other allies, set against a robust commentary from China’s state news agency Xinhua that also called the United States “myopic”, demonstrate the delicate balancing act Obama faces on a week-long Asia tour.

Obama arrived in Tokyo on Wednesday at the start of a four-nation trip that comes at a time of rising tension in the region, and as the United States urges Japan’s unpredictable neighbor North Korea not to conduct another nuclear test.

Obama, who is making the first full state visit to Japan by a U.S. President since 1996, must assuage worries by Tokyo and other allies that his commitment to their defense in the face of an increasingly assertive China is weak, without hurting vital U.S. ties with Asia’s biggest economy.

Obama and Japanese Prime Minister Shinzo Abe are also keen to show progress on a two-way trade pact seen as critical to a broader regional deal that would be one of the world’s biggest trade agreements and is central to Obama’s “pivot” of military, diplomatic and trade resources towards Asia.

Noting Beijing and Washington could work together on issues such as North Korea’s nuclear program, Obama told Japan’s Yomiuri newspaper, in written remarks: “In other words, we welcome the continuing rise of a China that is stable, prosperous and peaceful and plays a responsible role in global affairs.”

He added: “And our engagement with China does not and will not come at the expense of Japan or any other ally.”

Such assurances are likely to be high on the agenda when Obama meets Abe at a symbolic summit on Thursday.

Japan, whose relations with rival China have chilled over the past two years, has been beset by anxiety over the degree to which reality matches rhetoric in Obama’s promised “pivot”.

China, for its part, fears the U.S. is pursuing a policy of containment through its network of Asian allies, several of whom have long-standing territorial disputes with Beijing in the East and South China Seas.

“The United States should reappraise its anachronistic hegemonic alliance system and stop pampering its chums like Japan and the Philippines that have been igniting regional tensions with provocative moves,” it said.

Obama and Abe are expected to send a message of solidarity after strains following Abe’s December visit to Tokyo’s Yasukuni Shrine, seen by critics as a symbol of Japan’s past militarism.

Obama also assured Japan that tiny isles in the East China Sea at the heart of a territorial row with China are covered by a bilateral security treaty that obligates America to come to Japan’s defense. That is long-stated U.S. policy, but the confirmation by the president is likely to be welcome in Japan.

“The policy of the United States is clear – the Senkaku islands are administered by Japan and therefore fall within the scope of … the U.S.-Japan Treaty of Mutual Cooperation and Security,” Obama said, using the Japanese name for the islands that are known as the Diaoyu in China, which also claims them.

China reiterated that it “resolutely opposed” the islands being part of the security treaty.

“The so-called U.S.-Japan alliance is a bilateral arrangement from the Cold War and ought not to harm China’s territorial sovereignty and reasonable rights,” foreign ministry spokesman Qin Gang told a regular news briefing in Beijing.

Japanese and Chinese naval vessels and coastguard ships have played cat-and-mouse around the disputed islets since Japan’s government bought the then-privately owned territory in 2012.

A joint statement to be issued at the summit will state the two allies will not tolerate any attempt to change the status quo by force – a phrase that implicitly targets China – but likely not mention the islands or China by name, Japanese media have reported.

Obama also reaffirmed Washington’s commitment to the security of South Korea, and said it would stand firm in its insistence that a nuclear North Korea was unacceptable.

Seoul is the second stop on Obama’s four-nation swing, which also includes Malaysia and the Philippines.

“The burden is on Pyongyang to take concrete steps to abide by its commitments and obligations, and the United States, Japan and South Korea are united in our goal – the complete denuclearization of the Korean peninsula,” Obama said.

North Korea, already subject to United Nations’ sanctions over its previous atomic tests, the third and most recent of which took place in early 2013, threatened last month to conduct what it call “a new form of nuclear test”.

The United States said on Tuesday it was watching the Korean peninsula closely after news reports quoted the South Korean government as saying that heightened activity had been detected at North Korea’s underground nuclear test site.

“We continue to urge North Korea to refrain from actions that threaten regional peace and security and to comply with its international obligations and commitments,” State Department spokeswoman Jen Psaki told a regular briefing.

Top aides to the two leaders met on Wednesday to discuss a bilateral trade deal that has so far been stymied largely by Japan’s desire to keep tariffs on politically sensitive farm products such as beef.

“This a moment for Japan to take an elevated view and to choose a bold path of economic renewal, revitalization and regional leadership,” U.S. Trade Representative Michael Froman told reporters after negotiating with Economy Minister Akira Amari ahead of Obama’s evening arrival.

Amari said he had briefed Abe on the talks, but declined to comment on the content of the discussions.

Failure could take the wind out of the push for a broader agreement among the 12-nation group that would stretch from Asia to Latin America.

Some trade experts said despite the hurdles, a last-minute agreement could not be ruled out.

Both sides have stressed that the TPP would have strategic implications by creating a framework for business that could entice China to play by global rules.

The TPP talks are at “an important crossroads”, Froman said in brief remarks. “Its economic and strategic importance is clear.”