Dogs at Detroit airport get own bathroom 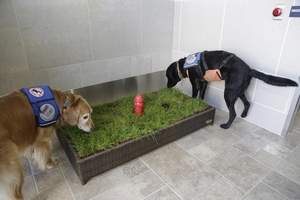 The facility, being called “Central Bark” by airport employees, features two boxes of grass–one artificial and one with real grass–and tiny fire hydrants for a doggie target, of sorts.

After the doggies are done doing their business, owners can push a button that releases a shower of water to clean the patches. Owners are responsible for picking up solid wastes, though.

Before the new facilities were installed, owners of service dogs had to take their helpers outside the terminal, an inconvenience at best and a security bother at worst.

“When you can’t get outside, when you don’t have enough time to go through TSA coming back through, it’s a wonderful convenience for our dogs,” said Deb Davis of Paws with a Cause, who attended the “ribbon biting” ceremony.

“Now it’s so much more of a convenience and so much healthier for our pets to travel comfortably,” she continued

The dual grass patches were a project of Delta Airlines in conjunction with airport officials.