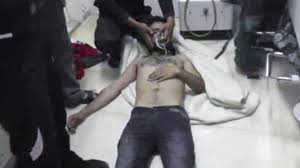 They said the chemical attack, the fourth the opposition has reported this month, was in the Harasta neighborhood.

Reuters could not independently verify the footage or the allegation due to restrictions on reporting in Syria.

Activists posted a video on YouTube on Wednesday of four men being treated with oxygen. A voice off-screen gave the date and said Assad’s forces used “poison gas in Harasta.” It did not say if there were fatalities.

The face of one of the men appeared to be covered in vomit. He was shown shaking and moaning as doctors treated him.

The voice off-screen said chemical weapons were also used in Harasta on Friday.

A U.N. inquiry found in December that sarin gas had likely been used in Jobar in August and in several other locations, including in the rebel-held Damascus suburb of Ghouta, where hundreds of people were killed.

The inquiry was only looking at whether chemical weapons were used, not who used them. The Syrian government and the opposition have each accused the other of using chemical weapons during the three-year-old civil war. Both sides have denied it.

The Ghouta attack caused global outrage and a U.S. threat of military strikes, dropped after Assad pledged to destroy his chemical weapons arsenal.

But the Syrian government failed to meet a February 5 deadline to move all of its declared chemical substances and precursors, some 1,300 metric tons, out of the country. Syria has since agreed to remove the weapons by late April.

More than 150,000 people have been killed in the civil war, which began as peaceful protests against Assad’s rule, a third of them civilians, according to the Syrian Observatory for Human Rights. Millions have fled the country.

When opposition activists reported that helicopters had dropped chlorine gas on the rebel-held village of Kfar Zeita on Friday and Saturday, U.S. ambassador to the United Nations Samantha Power told ABC’s “This Week” the attack was so far “unsubstantiated”.

On Sunday, activists posted photographs and video they said showed an improvised chlorine bomb to back up claims that Assad’s forces used chemical weapons in Kfar Zeita, which the government blamed on rebels.