One of the world’s most dangerous crocodiles captured in Beirut 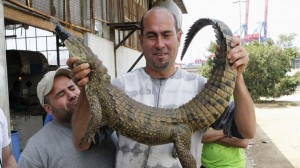 A crocodile was captured in Beirut River several months after more than one reptile were spotted in the area.

It was identified as Crocodylus Niloticus (or a Nile crocodile) and it is among the most dangerous crocodiles in the world.

The state-run National News Agency reported that the crocodile was caught by a hunter and weighs around 20 kilograms.

The first crocodile was spotted in the area in July was said to be between 3 to 5 years old.

Witnesses had said that “at least three other reptiles of same specie were present in the river.”

The crocodile was described as “one of the most dangerous types of the species.”