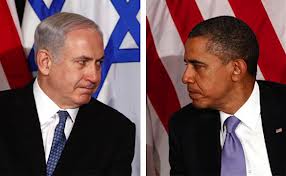 The White House said Wednesday it was disappointed by “unhelpful” actions by both Israelis and Palestinians that threaten to tear apart a U.S.-led peace effort.

Secretary of State John Kerry’s bid to save peace talks is in peril after Israel announced plans for new settlement building and the Palestinians took steps towards seeking international recognition.

He added that “tit for tat” actions were counterproductive but that despite ominous signs, the U.S. administration still believed diplomacy had a chance.

“There is a path for us to diplomatically find a way for there to be a safe, secure Jewish state of Israel existing alongside an independent, secure Palestinian state as well,” Earnest told reporters aboard Air Force One.

Most media coverage in the United States has focused on Palestinian president Mahmud Abbas’ decision to sign 15 treatises as a step towards seeking membership in U.N. agencies and conventions.

The Palestinians had long said they would seek international recognition if their hopes for statehood continued to be undermined by stalled peace moves and Israeli settlement building on land they want for a future state.

The comments by Earnest appeared to be an attempt to also put blame for the teetering state of the peace effort on Israelis.

U.S. officials were privately angered on Tuesday when Israel reissued tenders for 708 settler homes in Gilo, a settlement neighborhood in Arab East Jerusalem.