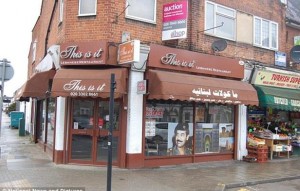 A Lebanese restaurant owner has placed a giant poster of Saddam Hussein in his eatery’s window.

Ayyad Al-Hamdan, 43, the owner of This Is It in Harrow, north-west London, has sparked outrage among local residents by placing the picture of the ruthless Iraqi dictator on display.

He has refused a request from council chiefs to remove the ‘offensive’ photograph, saying it is a political protest. Several people have left angry comments about it on the TripAdvisor review website.

One Harrow resident said: ‘We live in a society where a cabbie can be told not to fly the St George flag in his car or people can’t display them in offices. And yet this guy gets away with posting a picture of Saddam Hussain in his window. It is utterly barmy.’

Another added: ‘I will never go there again as they now have a huge poster of a smiling Saddam Hussein in their window. Are they completely mad or just total morons? I think this place should be boycotted. How dare they?’

Harrow Council leader Susan Hall went to the restaurant with an enforcement officer and asked the owner to take the picture down. She said the owner was ‘polite but defiant’ and said it was not a council issue and it was his freedom to display the picture.

‘Public images of dictators be it Saddam Hussain, Hitler, or the leader of North Korea for that matter, have no place in Harrow. This is a restaurant promotion that leaves a nasty taste in my mouth.’

He said: ‘The council and police have come here and asked me to take it out of the window and put it in the restaurant. But I won’t, there is no point. I want people to see it. I told them I will take it to the court.’

Mr Al-Hamdan admitted angry passers-by had stormed into the restaurant and hurled abuse at him – and that he risked offending the families of British soldiers killed in the Gulf wars.

However, he added: ‘If people are upset about it then they can come and speak to me.

‘Go back to 1990. The British soldiers when they tried to kick Saddam from Kuwait, think about how may soldiers they lost there, how many went mad. Now we in Kuwait need help again.’

The asylum seeker, who said he came to Britain in 1997, explained that he forked out £60 for the print of the tyrant in protest over the Government in his native country.

He said: ‘The British and Americans said that Saddam was a dictator, and they removed him to give freedom for the people of Iraq.

‘But now we in Kuwait are dying slowly. No-one cares about them because the British government has a good relationship with the Kuwait government.’