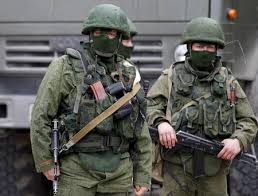 Russia justified its intervention in the Crimea as a legitimate response to a request from Ukraine’s ousted president amid threats posed by extremists, while Western leaders sought to keep the standoff from spiraling into war.

The U.S. condemned what it called a breach of Ukraine’s sovereignty after Vitaly Churkin, Russia’s ambassador to the United Nations, said yesterday the crisis is creating serious risks to Russian security and to the safety of millions of Russian-speakers in southeastern Ukraine. Russia ended a military drill on time yesterday.

“It’s completely legitimate under Russian law, and given the extraordinary situation in Ukraine, this threat and the threat to our compatriots, Russian citizens and the Black Sea Fleet,” Churkin told a meeting of the UN Security Council in New York, reading out loud the March 1 letter from Yanukovych.

Crimea, where ethnic Russians comprise the majority, has become the focal point of the crisis after an uprising in Kiev caused Yanukovych to flee to Russia. Ukraine has mobilized its army and requested foreign observers after Russian forces took control of the peninsula, where Russia keeps its Black Sea fleet at Sevastopol. Russian forces had ordered Ukrainian warships in Crimea to surrender, Ukraine’s acting President Oleksandr Turchynov said yesterday.

Putin oversaw the end of military drills in western Russia yesterday and order soldiers to return to their bases, according to the Russian Defense Ministry. The exercises, which included fighter jets and tanks near the border with Ukraine, weren’t connected to the events in the neighboring country, Defense Minister Sergei Shoigu said Feb. 26.

U.S. Ambassador to the UN Samantha Power struck back at Churkin, saying during yesterday’s Security Council meeting that his assertions were “without basis in reality” and that “Russian mobilization is a response to an imaginary threat.”

“Russian military action is not a human-rights protection mission,” Power said. “It is a violation of international law and a violation of the sovereignty and territorial integrity of the independent nation of Ukraine, and a breach of Russia’s Helsinki commitments and UN obligations.”

The Security Council met as the worst standoff between the West and Russia since the Cold War intensified, with U.S. Secretary of State John Kerry set to arrive in Ukraine’s capital today.

Churkin said Russia’s decision to call an emergency Security Council meeting doesn’t mean Putin has decided to use armed force in Ukraine under the authorization of Russia’s parliament.

The first, the officials said, is where Putin intends to stop — at regaining Crimea, at reestablishing Russian domination over parts of eastern Ukraine, at breaking the country in two roughly at the Dneiper River, where the capital Kiev is located, or not until Russian forces reach Ukraine’s border with Poland, a NATO member.

The second, said the officials, speaking on the condition of anonymity to discuss intelligence matters, is whether Putin is prepared to order his troops to fire on Ukrainian forces or civilians who resist or content to threaten the use of force.

Fiona Hill, director of the Center on the United States and Europe at the Brookings Institution, a Washington policy group, said Russia could escalate the crisis and cited reports of Russian secret services helping organize rallies in other Ukrainian cities calling for Russian intervention.

“If they manage to stage scenes of mayhem” in other cities in eastern Ukraine, “and there are certain signs they may be able to do that, they now have blanket approval basically to sanction action on behalf of Russian peoples,” Hill said.

The U.S. has suspended military ties with Russia because of the crisis and is urging Russian forces in Crimea to return to their bases, Navy Rear Admiral John Kirby said yesterday in a statement. The suspension affects military exercises, bilateral meetings, port visits and planning conferences, Kirby said.

The Pentagon is monitoring the situation closely, Kirby said. He added that there has been no change to U.S. military posture in Europe or the Mediterranean.

In Washington, President Barack Obama said the U.S. and allies were preparing sanctions to show Russia its actions will be “costly,” speaking to reporters yesterday before a White House meeting with Israeli Prime Minister Benjamin Netanyahu.

“We are examining a whole series of steps — economic, diplomatic — that will isolate Russia” if it continues on its current course, said Obama, who spoke to Putin by telephone on March 1. One option he cited would be to send international monitors to “de-escalate the situation.”

Kerry said March 2 that Russia may lose its membership in the Group of Eight industrialized nations and raised the prospect of asset freezes, visa bans and trade disruptions.

The leaders of Canada, France, Germany, Italy, Japan, the U.K. and U.S., along with the heads of the European Council and the European Commission said they wouldn’t resume preparations for the summit in Sochi, Russia, “until the environment comes back where the G-8 is able to have meaningful discussion.”

“We strongly urge that all parties exercise restraint, avoid the use of force, obey international law and respect the territorial integrity of Ukraine,” Japan’s Chief Cabinet Secretary Yoshihide Suga said in Tokyo today.

The Obama administration has halted bilateral trade and investment talks with Russia, Trevor Kincaid, a spokesman for the U.S. Trade Representative’s Office, said yesterday in an e-mail. As recently as December, Russian officials met with U.S. Trade Representative Michael Froman to discuss the possibility of boosting trade between the two nations by increasing investment and standardizing regulations.

Increased military tensions have diverted the attention of U.S. and EU officials who have been racing to secure billions of dollars of bailout cash for Ukraine’s new government. A team from the International Monetary Fund arrived yesterday in Kiev and will spend a week assessing the country’s needs, according to First Deputy Managing Director David Lipton.

Ukraine needs $15 billion in the next 2 1/2 years to stay afloat, Finance Minister Oleksandr Shlapak said March 1. It’s seeking about $3 billion of financing in the first installment, according to a person with knowledge of the talks. Lipton said that the IMF is ready to provide support if Ukraine take steps to address some of its problems. The nation faces both economic and security challenges, Lipton said.

The crisis is roiling global markets. Russia’s ruble weakened to a record low against the central bank’s dollar-euro basket even after policy makers unexpectedly raised their benchmark rate by 150 basis points to 7 percent yesterday. The Micex stock index plunged 11 percent, the most since 2008, while bond yields jumped, while the Dow Jones Industrial Average fell almost 1 percent.

U.S. Treasuries rallied this week as investors sought the safest assets, while Brent crude rose as much as 3 percent. There have been no disruptions to oil shipments to Europe through the Druzhba pipeline that crosses Ukraine, a key east-west transit nation for Russian energy, OAO Transneft spokeswoman Natalya Kutsik said yesterday.

Ukraine’s hryvnia weakened 2 percent yesterday to 9.75 per dollar, while the yield on its dollar debt due 2023 soared 106 basis points to 10.506 percent, data compiled by Bloomberg showed.

Putin claims extremists orchestrated a coup to dislodge Yanukovych and says Russian speakers in Ukraine’s east and south need protection. The Russian parliament has authorized Putin to use military force to protect Russians in Ukraine if they’re under threat.

“The biggest risk is of unintended escalation,” said Janine Davidson, a former U.S. deputy assistant defense secretary who’s now at the Council on Foreign Relations, a Washington policy group. She said many conflicts have been escalated accidentally by military commanders whose actions have had unintended consequences.

Crimea was given to Ukraine by Russia in 1954 by then-Soviet leader Nikita Khrushchev. People who identified themselves as ethnic Russian comprise 59 percent of Crimea’s population of about 2 million, with 24 percent Ukrainian and 12 percent Tatar, according to 2001 census data. Russians make up 17 percent of Ukraine’s entire population of 45 million.

If the situation did escalate, Putin would face a tougher challenge, Davidson said.

“If this does spiral out of control and we end up with an all-out civil war, we should prepared for humanitarian options,” Davidson said. “If there’s, God forbid, refugees flowing, we should be thinking through something like that.”