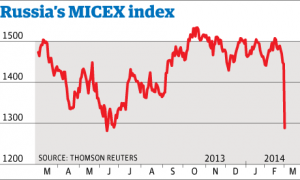 Russia’s financial system punished Vladimir Putin far more swiftly than western diplomacy on Monday, as the Moscow stock market suffered one of its biggest one-day falls in recent years and the rouble tumbled sharply in a first nervous reaction to the Kremlin’s gambit in Crimea.

Some £34bn was wiped off the value of companies on the Moscow stock exchange on Monday and the central bank burned through an estimated £10bn of its reserves propping up its currency as investors took fright at the most serious standoff between Russia and Ukraine since the fall of the Soviet Union.

The bank was also forced to raise its main interest rate from 5.5% to 7% – the largest hike since financial crisis ruined Russia in 1998.

Neil Shearing, chief emerging markets economist at Capital Economics, said: “It goes without saying that the extent to which [central bank moves are] successful will depend largely on political rather than economic developments.”

Though some traders said the rout might be a momentary blip, the possibility of an economic and financial crisis may be more irksome to Putin than threats from the west. The last two Kremlin leaders (not including Putin’s interim, Dmitry Medvedev) – Mikhail Gorbachev and Boris Yeltsin – were politically emasculated by swingeing economic crises that effectively bankrupted the state.

Gazprom, the state-controlled energy producer with pipes running through Ukraine and millions of hard-currency European clients at the other end, was hit hard and lost more than 12% of its value in just a few hours of trading. State oil company Rosneft fell almost six percent. Global stock markets also suffered from spreading jitters, with the FTSE down 1.5% and the Dow Jones Industrial Average off more than 1 percent in morning trading.

The Russian deputy economy minister, Andrei Klepach, said market “hysteria” would subside but strains with Brussels and Washington – which has threatened visa bans, asset freezes and trade curbs – would continue to weigh on the economy.

“The EU and APEC countries, which could in the worst-case scenario support an embargo, accounted for more than 70% of the total Russian export in 2013, or $378bn,” said Investcafe analyst Timur Nigmatullin.

“If exports are sharply reduced, within a few months it would send Russia into a recession similar to the one it saw during the 2008-09 economic crisis,” Nigmatullin added.

But others cautioned that Russia’s adversaries in the west do not hold strong cards. “Germany and Italy are very dependent on the Russian market and Russian energy,” said Eric Kraus, an independent portfolio manager focusing on Russia.

“To get into a trade war at this time with Russia for these countries would be insane, it would be suicidal. If they were to impose sanctions Russia would turn off the gas, which would be a huge problem.”

Investors are watching Gazprom particularly closely, as it supplies millions of European homes via Ukraine. Europe relies on the company for as much as a quarter of its gas – but Russia equally is deeply dependent on European customers for its gas income.

Gazprom’s finance chief warned Ukraine that it may hike gas prices from next month, accusing Kiev of a patchy payments record, but said gas pipelines were flowing as normal at the moment.

Jack Ablin, chief investment officer at BMO Private Bank, said: “I see this as a Russian issue more than a US one. The impact may be felt in Europe and emerging markets but, if anything, that’s likely to drive people to the US markets instead,” he said.

“The rouble is falling as is the Russian market. There could be a lot of potential economic damage for Russia from this.”

Nigel Green, founder and CEO of financial adviser deVere Group, said: “The situation will perhaps fuel some of the concerns regarding emerging markets, although I expect the problems will, in the most part, be limited mainly to Russia and Ukraine.”

“As the situation regularises, in whichever form that might take, and the world becomes accustomed to the new and/or existing realities, investors are likely to classify the Ukraine-Russia standoff as a local issue.

“Global financial markets will then return to focusing on key fundamentals, such as the improving trend of US economic data, than to what is happening in Ukraine.”