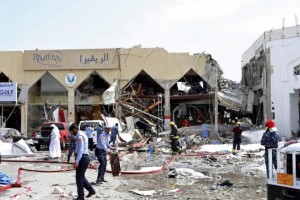 Twelve people including two children were killed on Thursday when a gas tank exploded at a Turkish restaurant in the Qatari capital Doha, authorities in the Gulf Arab state reported.

About 30 others were injured in the blast at the Istanbul Restaurant that one security source said was accidental.

Another security source at the scene said two Asian children were among the dead.

Chunks of masonry, metal debris and shattered glass lay outside the restaurant in a northwestern district of the city. Cars nearby were apparently crumpled by the explosion.

The incident was the deadliest in Qatar since May 2012, when at least 19 foreign nationals, including 13 children, were killed by a fire in an upscale shopping mall.

In a separate incident on Thursday, medics and security sources at the Hamad medical city in Doha said dozens of people were hurt in the afternoon due to a gas leak at a chemical plant in an industrial area near Doha.

They gave no figures or details on their condition, but said helicopters were despatched to fly victims of the leak to the Hamad medical center quickly as ambulances had been caught in heavy traffic caused by the restaurant incident.

The gas- and oil-rich Gulf Arab state with an estimated national population of at least 200,000 has one of the highest standards of living in the world. The bulk of the 2 million population of Qatar are foreigners.

The restaurant is on the outskirts of the capital near Landmark mall, a well-known shopping complex usually busy with families.

“I was eating in a restaurant close by and suddenly heard a big (blast) and everything around me exploded,” Abdul-Rahman Abdul-Kareem, an Indian driver, told Reuters at Hamad hospital. “I have too much damage now, my legs are broken and my head is (wounded).”