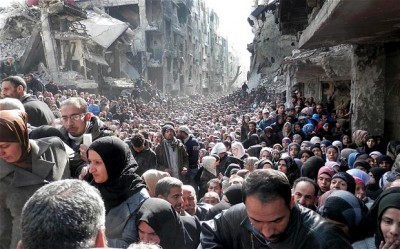 A picture showing thousands of residents queuing for food has revealed shocking levels of deprivation inside a beseiged camp in Syria.

The scene of thousands of trapped residents standing among the shells of blackened buildings and mounds of rubble in the Damascus district of Yarmouk was today described as “apocalyptic” by UN officials during a rare visit.

Filippo Grandi, the UN Relief and Work’s Agency’s Commissioner General, said he was left “shaken and deeply disturbed” by the conditions he witnessed when humanitarian aid distribution began again on Monday morning.

UN officials have called on both forces loyal to President Bashar al-Assad and rebel groups to allow aid workers to deliver much-needed food and medicine into Yarmouk – a predominantly Palestinian neighbourhood where residents have remained trapped for almost a year.

Yarmouk has seen some of the worst fighting in the capital, leading to to severe food shortages and widespread hunger.

The photograph – which was taken last month but released today by the UN – shows thousands of the some 160,000 residents who remain trapped queuing as far as the eye can see for food parcels and water.

The Yarmouk camp, located on the southern edge of Damascus, is one of the hardest-hit of a number of opposition enclaves under tight blockades imposed by pro-government forces.

Activists and aid groups have accused the military of using starvation as a weapon of war, while the government says “terrorists” are holding people hostage in besieged areas.

The UN relief agency has distributed more than 7,000 food parcels in the camp since 18 January. The UN has reported infant malnutrition in the community, which has been reduced to eating animal feed

Activists say at least 85 people had died in Yarmouk since mid-2013 as a result of starvation and illnesses exacerbated by hunger or lack of medical aid.

The resolution called for the immediate lifting of sieges in specific towns and cities around the country, including Yarmouk, that took in refugees after the creation of Israel, where people have been trapped for eight months by an army siege.

Video posted on YouTube by a citizen journalist shows residents in Yarmouk lining up to receive aid but complaining that the recent aid is much too little and they are still forbidden from leaving the area.

“We don’t want aid parcels; open the road, and then we can get food and drink outside,” said a woman.

“They bring 10 aid parcels and Syrian TV films and so they say we distributed aid. This is a lie,” he said, standing in a group of men, women and children, ruined streets behind them.

Photo: This picture taken on January 31, 2014, and released by the UNRWA on February 26, 2014, shows residents of the besieged Palestinian camp of Yarmouk queuing to receive food supplies in Damascus, Syria Photo: UNRWA/AP