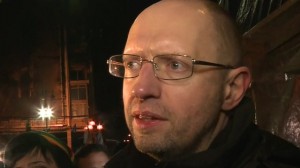 The Maidan council named Arseniy Yatsenyuk to become prime minister. The cabinet – to be voted on by MPs on Thursday – includes leading activists.

The US has offered Ukraine’s struggling economy – which faces default – loan guarantees of up to $1bn (£600m).

Meanwhile, Mr Yanukovych has been put on the international wanted list.

The fugitive president – whose whereabouts are unclear – is accused of being behind last week’s deaths of more than 100 protesters at the hands of riot police in and around the Maidan.

Mr Kerry also warned Russia it would be a “grave mistake” to embark on any military intervention in Ukraine.

The Maidan council – made up of protester groups and activists – announced its nominations at a big gathering of protesters at the camp, which is spread over Kiev’s Independence Square.

The council proposed Fatherland Party leader Arseniy Yatsenyuk to lead the cabinet until early presidential elections on 25 May.

Mr Yatsenyuk – a former speaker of parliament and foreign minister – has been one of the main opposition leaders during the protests which first erupted in late November.

“We are to undertake extremely unpopular steps as the previous government and previous president were so corrupted that the country is in a desperate financial plight,” Mr Yatsenyuk told BBC Ukrainian.

“We are on the brink of a disaster and this is the government of political suiciders ! So welcome to hell,” he added.

It was agreed that acting Interior Minister Arsen Avakov would keep his post. Other nominations include:

The key foreign affairs ministry portfolio goes to Andriy Deshchytsia, who played a key role in rallying diplomats in support of the protests

Tetyana Chornovol and Dmytro Bulatov – prominent activists who were badly beaten by unknown attackers earlier this year – are set to head the anti-corruption bureau and the ministry of youth and sports respectively.

“Today, our task is not to die for Ukraine like it was last week. Today, we must work for Ukraine!” said Ms Chornovol, who is also a well-known investigative journalist.

However, some of the nominations – including that of Mr Avakov – prompted loud booing from the crowd, who said those candidates were not worthy of government posts.

People also chanted “Yarosh! Yarosh!”, demanding that the leader of the Right Sector, Dmytro Yarosh, be given a post.

Acting President Oleksandr Turchynov argued from the Maidan stage that without governing structures, the country would descend into “anarchy”. But he, too, was interrupted and booed.

“The Maidan is here to stay. If they (new ministers) betray us, we will pay a visit to every one of them,” a local Maidan commander warned.

The parliament is now expected to vote in the new government on Thursday.

Earlier on Wednesday, pro-Kiev and pro-Moscow protesters scuffled in the capital of Ukraine’s Crimea region, Simferopol, amid rising tensions there.

Only a police cordon separated the rallies – one pro-Russian, the other involving Crimean Tatars and people backing Ukraine’s change of government.

One elderly man died, probably from a heart attack, during the confrontation outside parliament.

Crimea – where ethnic Russians are in a majority – was transferred from Russia to Ukraine in 1954.

His comments came after Russian President Vladimir Putin ordered a snap drill to test the combat readiness of troops in central and western Russia, near the border with Ukraine.

Such checks are not uncommon although the timing is seen as significant, correspondents say.

Russia, along with the US, UK and France, pledged to uphold the territorial integrity of Ukraine in a memorandum signed in 1994.

Unrest in Ukraine first erupted in November, following Mr Yanukovych’s last-minute decision to reject a landmark association and trade deal with the European Union in favour of Russia’s bailout offer.

22 Feb: flies by helicopter to Donetsk airport; tries to leave on private jet but stopped by border guards; leaves by car for Crimea

23 Feb: arrives in Balaklava, Crimea, and stays briefly in a private spa before making aborted attempt to reach Belbek airport

Dismisses most of his security detail; leaves Balaklava in a three-car convoy with some guards and presidential administration head Andriy Kliuyev