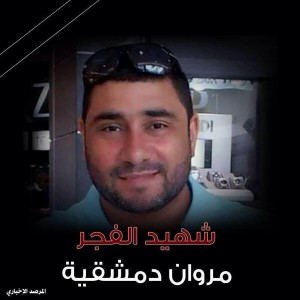 Beirut, Lebanon – Islamic League political leader Azzam al-Ayyoubi verified that Marwan Dimashqiyyeh, whose body was found inside his car yesterday near Dbayeh, had been a member of the league for almost ten years, according to a report by NOW.

Ayyoubi said Dimashqiyyeh was known for backing the Syrian revolution and had supported that cause in Lebanon by helping refugees. He added that Dimashqiyyeh had recently participated in the writing of the song “Dig Your Grave in Yabrud,” a reply to song “Finalize your victory in Yabrud/Nasr Yabrud” by Hezbollah supporter Ali Barakat.

Ayyoubi explained to NOW that “the [religious] convictions held by Dimashqiyyeh [would not allow him] to commit suicide. [There must have been] some kind of operation to eliminate him.” At the same time Ayyoubi refused to confirm accusations that appeared on social media websites implying that Hezbollah carried out the killing because of his involvement with the song.

The Islamic league in Beirut later released a statement saying “in response to [claims] by certain media outlets and websites that the deceased Marwan Dimashqiyyeh [wrote] the song Dig Your Grave in Yabrud, we in the Islamic League in Beirut wish to affirm that there is no link between the deceased Marwan Dimashqiyyeh and that song, neither in singing nor writing it.”

“We confirm our previous statement: The Islamic League neither accuses anyone of committing the murder nor [presents] any theory [concerning the crime]. It calls on its supporters and members to maintain self-discipline and not to trust in rumors. Investigations will be followed until the absolute truth is reached. Therefore, we hope that the media will uphold precision [sic] in publishing its information, especially in these sensitive circumstances.”

After news of Dimashqiyyeh’s death went public, the official website of the Free Syrian Army promised to take revenge against Barakat.

Yesterday evening the Islamic League in Beirut issued a statement saying that Dimashqiyyeh “went out just before dawn on Tuesday 25/2/2014 to perform morning prayers as usual. Nothing was heard of him [until] discovery of his body near the sea road, Nahr al-Kalb.”

The statement added that: “as soon as the body arrived and [Dimashqiyyeh’s] identity was confirmed, a committee was formed by the Islamic League to follow the official investigation and communicate with the various security and judicial bodies to reach the [full] truth.”

“The official security and judicial investigations the League has followed show that Dimashqiyyeh was shot in the head inside his car, and that there were no signs of [violence], abduction, torture or binding.”

Dimashqiyyeh’s body was found yesterday in his car on the Nahr al-Kalb road in Dbayeh, with a gunshot wound to the head. Security sources told NOW that investigations into calls made from Dimashqiyyeh’s mobile had been initiated. The sources said suicide was unlikely, as the gun used to kill Dimashqiyyeh was found between his legs rather than to the left or right of his body.