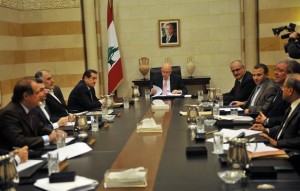 The committee charged with drafting the ministerial policy statement of the newly formed cabinet concluded its meeting Monday without reaching a final decision, and a new meeting is scheduled for Tuesday at the Grand Serail to continue the discussions.

The discussions did not touch upon the clause related to the resistance, but were limited to the Baabda declaration .

Foreign Minister Gebran Bassil, a member in the committee, voiced his rejection to acknowledge the Baabda declaration in the ministerial statement.

“There are attempts to include the Baabda declaration in the ministerial statement,” Bassil told Al-Joumhouria newspaper. “This will not work, time is being wasted .”

Meanwhile, Telecommunications Minister Boutros Harb revealed that Prime Minister Tammam Salam suggested new ideas on how to approach the Baabda declaration and the resistance issue in the ministerial statement.

“Some ministers asked for some time to consult with their party leaders,” Harb told An-Nahar daily.

An-Nahar newspaper also reported that President Michel Suleiman expressed his desire to add the Baabda Agreement in the ministerial statement during his meeting with Salam on Monday morning, “due to its vital importance.”

Raad briefed Suleiman on Hezbollah’s remarks on the agreement and the reasons to oppose it, especially in the light of the developments of the Syrian crisis and its impact on Lebanon.

Raad also reiterated that “other Lebanese parties went to Syria before we did.”

Meanwhile, Suleiman stressed the importance of the Baabda declaration in “drawing a certain threshold for Lebanon’s foreign policy.”

Suleiman also noted that the Baabda declaration attracted international support for Lebanon on all levels.

A ministerial source was reportedly quoted as saying on Monday that “the committee would probably approve most of the articles stipulated in the Baabda Agreement, especially the one stipulating Lebanon’s neutrality regarding the regional and international conflicts.”

However, the main controversy surrounds article 13 of the agreement related to the Syrian crisis, with Hezbollah having reservations on it and refusing to add it as it stands, and the March 14 parties insisting on adding it in the ministerial statement.

The source also reported that the committee is still debating on how to draft the clause related to resisting Israel.

March 14’s suggested formula is “Lebanon’s right to defend itself,” while the March 8 parties want the clause to acknowledge “the right of Lebanon and the Lebanese people to self-defense and to the resistance against the Israeli enemy.”

The source noted that a new suggestion was brought forward to reach compromise between the two parties by stating that “Lebanon has the right to defend itself with all available means.”

President Suleiman expressed hope on Tuesday that the ministerial policy statement will be approved before March 5.

He hoped that the statement will be approved and granted parliament’s vote of confidence ahead of the International Support Group on Lebanon’s meeting in Paris set for March 5 and 6.

He made his remarks before a delegation of ambassadors from the countries included in the Group.

“The Paris meeting is aimed at assessing what was achieved by the support group meeting in New York” in September, continued Suleiman.

It should also outline the necessary measures to support Lebanon on the political, economic, and military levels.

It should also address the case of the Syrian refugees in Lebanon, said the president.

The support group was inaugurated in New York in September 2013, on the sidelines of the 68th session of the General Assembly. It undertook to work together to mobilize support for the sovereignty and state institutions of Lebanon and to highlight and promote efforts to assist the country where it was most affected by the Syrian crisis, including in respect of strengthening the capacity of the Lebanese army, assistance to refugees, and structural and financial support to the government.

The Paris meeting will focus on humanitarian aid to help improve the situation of displaced Syrians in Lebanon, boosting the capabilities of the Lebanese army and tackling Lebanon’s economy.

The number of Syrian refugees in Lebanon had surged to nearly one million according to the United Nations’ refugee agency (UNHCR) as Lebanon has been facing difficulties in coping with their burden.

One observer commented to Ya Libnan about the cabinet policy statement by saying:

“It took PM Salam over 10 months to form the cabinet and it looks like it will take him another 10 months to tell us what his cabinet will be doing , so God knows when a new president will be elected .”