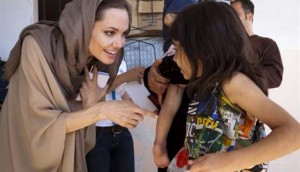 Actress and U.N. special envoy Angelina Jolie made a surprise visit to Lebanon to draw attention to the challenges facing thousands of Syrian refugee children and to highlight the massive displacement Syria’s three-year conflict has created, officials said Monday.

During a three-day visit, Jolie visited unaccompanied children living in the eastern Bekaa Valley, where much of the poorest Syrian refugees in Lebanon reside, as the United Nations Refugee Agency Special Envoy. The 3,500 children are those who were orphaned, or separated from their families as they fled into Lebanon.

They form part of the nearly one-third of all Syrians who have been displaced from their homes since an uprising against the President Bashar Assad began in March 2011. About 2.5 million Syrians have become refugees; and another 4.2 million are displaced within Syria, the U.N. estimates — some one-third of the country’s pre-war population.

“Meeting these children was a heart-rending experience,” said Jolie in a statement issued via the U.N. “They have lost their families and their childhood has been hijacked by war. They are so young, yet they are bearing the burdens of their reality as if they are adults.”

The tiny Mediterranean country of Lebanon, which neighbors Syria, has absorbed nearly one million refugees, swelling the country’s population by one-fifth.

The concentrated numbers of refugees have overwhelmed Lebanon’s infrastructure, raised rents and flooded the public health and education systems throughout the country. The poorest refugees huddle in tents made out of old billboard advertisements on land they rent out from farmers in the Bekaa Valley; the shelters offer little against the country’s bitter winters and hot summers.

Parents of thousands of Syrian children have pulled them out of schools, because they cannot afford the modest Lebanese school fees, or because they need them to work — often as shoe shiners and car cleaners.

During her visit, Jolie called on the international community to ensure the implementation of a recent U.N. resolution that called for humanitarian assistance to reach Syrian civilians.

On Saturday, the United Nations Security Council passed a resolution demanding immediate access everywhere in Syria for humanitarian aid. The resolution, which marked a rare instance of unity on the security council, doesn’t threaten sanctions but it does express the council’s intention to take “further steps” if the resolution isn’t implemented

Jolie said her meeting was also to thank Lebanon for hosting the refugees.

“The generosity and solidarity shown by Lebanon and Lebanese to its neighbor serves as an example to the world for which we should all be grateful. We all need to help them bear this burden,” Jolie said.

Also in Syria, activists said that military aircraft have struck a rebel-held town near Damascus, as government forces intensified their efforts to subdue opposition-held communities around the capital.

An activist who uses the name Mamoun Abu Saker said three strikes targeted homes in the town of Nashabiyeh on Monday.

Abu Saker says at least four people were killed, and others are still buried under rubble. He said two strikes first hit the homes, and then as people rushed to rescue casualties, another strike hit the same area.

The Britain-based Syrian Observatory for Human Rights confirmed the strikes, but not the death toll. The Observatory has a network of activists on the ground.

In recent months, Syrian forces loyal to Assad are focusing their efforts on taking back a rebel-held ring of communities around Damascus.