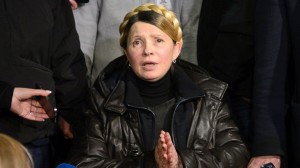 Thousands of Ukrainians packed Independence Square in Kiev to see former Ukrainian Prime Minister Yulia Tymoshenko addressed her supporters mere hours after being released from a hospital where she was emprisoned.

Tymoshenko addressed the crowd from a wheelchair, her hair in her signature braid, but she spoke forcefully.

“You are heroes, you are the best thing in Ukraine,” Tymoshenko told the crowd as they held up candles.

Tymoshenko, who was convicted of abuse of office, has reportedly suffered from severe back problems in prison. While she appeared weaker and her signature braid less blond,she spoke forcefully practically shouting into the microphone.

Just hours earlier Tymoshenko emerged from confinement and thanked the people for her freedom after 2 1/2 years behind bars. She vowed she would “make it so that no drop of blood that was spilled will be forgotten.”

Although she appeared weaker after leaving her release, she told a crush of reporters and supporters that she would “run for president” as she was wheeled out of the hospital.

Tymoshenko, the galvanizing figure of the Orange Revolution despite having been one of Ukraine’s most powerful oligarchs, earning the nickname the Gas Princess, was the Ukrainian prime minister from 2007 to 2010, when she lost the presidential election to Viktor Yanukovych.

She said she would fly immediately from prison to Kiev to join the protests.

Yanukovych was impeached today by an overwhelming majority of parliament, and new elections were scheduled for May 25.

Yanukovych had already fled from country’s capital city of Kiev to Kharkov in the Russian-speaking eastern part of the country. He likened his impeachment and the protesters actions to a “coup.”

“They are trying to scare me. I have no intention to leave the country. I am not going to resign, I’m the legitimately elected president,” a shaken Yanukovych said in a statement.

“Everything that is happening today is, to a greater degree, vandalism and banditry and a coup d’état,” he said. “I will do everything to protect my country from breakup, to stop bloodshed.”

In the statement the ministry says it shares the desire for “change as soon as possible” and goes on to call for calm and for protesters to avoid attacking police as they work towards building a new country.

The statement ends with the phrase “Slava Ukraini!” or “Glory to Ukraine!,” which has been the rallying cry in Independence Square for months.

While the U.S. has not released any statement about today’s events, the Russian Foreign Ministry reacted forcefully and said the opposition “failed to fulfill any of its obligations” in the deal that was brokered Friday and was “following the lead of armed extremists and thugs.”

Russia also lashed out at Europe, calling on the European Union “to use its influence on the opposition to secure his immediate execution and curb rampaging thugs. It’s time to stop misleading the world public and pretend that today represents the interests of Ukrainian Independence people.”

In Kiev after a week of heavy fighting between police and protesters that left dozens dead, the city appeared calm for now. Police have pulled back from their posts and protesters have set up security around parliament and other government buildings.

Protesters have even taken over Yanukovych’ s large residence outside Kiev, which includes a zoo and golf course.

“The people have won, because we fought for our future,” Klitschko said to a crowd of thousands. “”It is only the beginning of the battle.”

Both Klitschko and the Interior Ministry called for calm and for protesters to avoid attacking police.