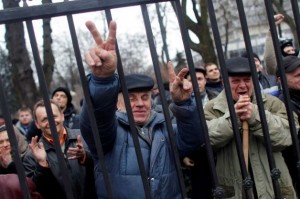 Ukraine’s Parliament voted Saturday to remove President Viktor Yanukovych and set new presidential elections for May 25. The action came hours after he left the capital and protesters took control of the city center.

Mr. Yanukovych vowed to remain in power, and in an afternoon interview with a small TV station in Kharkiv in the eastern portion of the country, he denounced the events in Kiev as a “coup d’état” that he blamed on “bandits.”

“I have no plans to leave the country and I have no plans to resign. I am the legally elected president and all the international intermediaries I’ve talked to (over the last few days) have given me guarantees of security. We’ll see how those are fulfilled,” Mr. Yanukovych said in the TV interview.

Opposition leaders had signed a peace deal with Mr. Yanukovych Friday after dozens were killed in clashes between protesters and police. The deal proposed power sharing and presidential elections by the end of the year. But protesters weren’t satisfied and called for his immediate ouster, as police withdrew from the center of the capital Saturday.

The conflict threatened to deepen tensions between the West and Russia. European officials immediately backed the decisions of the parliament and rejected Mr. Yanukovych’s allegations of a coup. Moscow, which has strongly backed Mr. Yanukovych, denounced the events in Kiev as “a direct threat to the sovereignty and constitutional order in Ukraine.”

Despite Mr. Yanukovych’s defiance, it wasn’t clear how much support he had within the country’s government. The parliament also voted Saturday to replace a string of key cabinet officials, including the defense and interior ministers, with opposition members. And the Defense Ministry said in a statement that it would “in no way be drawn into the political conflict.”

Russian Foreign Minister Sergei Lavrov blasted the Ukraine opposition for not fulfilling terms of a European Union-brokered deal between Mr. Yanukovych and the opposition.

Meanwhile, U.K. Foreign Secretary William Hague said he agreed with his German counterpart, Frank-Walter Steinmeier, to support the new Ukraine government and would push for an International Monetary Fund financial-assistance package for Ukraine.

In a day of fast moving developments, Ukraine opposition leader and former Prime Minister Yulia Tymoshenko also was released from prison, according to the Interfax news agency.

Protests against Mr. Yanukovych’s government started in November when he shelved a partnership accord with the European Union in favor of closer ties with Russia, which promised financial assistance to the county. The protests quickly turned into broader antigovernment demonstrations after a crackdown on protesters.

In Kiev on Saturday, volunteer security brigades from among the protesters took over security at government buildings, and journalists reported around 300 people had entered Mr. Yanukovych’s opulent suburban residence without resistance.

Oleh Tyahnybok, an opposition leader, called on parliament to adopt a resolution calling on police and protesters’ “self-defense” forces to work to prevent looting in Kiev and other cities.

Outside the Kiev headquarters of Ukraine’s security service, plain-clothed men wearing earpieces stood at the street corners, eying those who passed. They wouldn’t say who they worked for.

The stout wooden doors at the main entrance were locked. At a side entrance for visitors a young man who identified himself as Dmitri said that officials were too busy to talk with reporters. “They are all in meetings,” he said.

With truckloads of activists armed with baseball bats driving the streets of Kiev, the security service appeared to be taking no chances. In the interior lobby and parking lot of the building, fire hoses and fire extinguishers were piled in the corners.

The Interior Ministry said in a statement that “it serves only the Ukrainian people and fully shares the desire of citizens for immediate change.” It called for cooperation from all sides to ensure public order.

Opposition lawmakers in parliament called for calm amid concerns over a power vacuum, calling on state officials and religious and civic leaders to work together to ensure order.

“If there is a reform-minded government in Ukraine, we will work with the international community and international financial institutions to support Ukraine,” Mr. Barroso told German newspaper “Welt am Sonntag.”