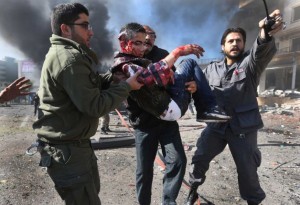 Two suicide bombers blew up their cars near an Iranian cultural center in Beirut on Wednesday, killing at least six people and wounding scores, including children in an orphanage, in the latest attack targeting Shiite areas in Lebanon.

An al-Qaida-linked group claimed responsibility for the bombings, saying they were retaliation for Hezbollah’s involvement in the Syrian war alongside President Bashar Assad’s forces. The Shiite militant organization is backed by Iran.

But the attack — like a dozen other similar bombings since July against Shiite areas of Lebanon — killed and wounded civilians. They included a dozen boys and girls living in a home for abandoned and orphaned children, said Dr. Hussam Bitar, a surgeon at Al-Zahraa hospital, where the youngsters were treated.

The blasts have embittered and angered residents, who say they are facing an unknown enemy seeking to kill them because of their faith.

“You can’t imagine this from somebody you live with, somebody who could be your neighbor,” Bitar said.

Bitar’s pants were stained with the blood of one of the orphaned girls who suffered shrapnel injuries. “She couldn’t even remember her name. Did the bomber think of that orphanage?” he asked.

The blast set cars and trees ablaze and shattered the windows of nearby buildings. Mangled metal hung from a smashed building that once held a pharmacy, a clothing shop and a well-known sweet shop, Gondoline. Blood and tattered clothes lay on the ground amid the charred remains of six cars.

“I thought it was an earthquake,” said Sam Hasna, a Lebanese-Canadian citizen and owner of the Gondoline. “Everything was on fire. The whole store had crashed down. I saw shattered people, shattered cars, and I collapsed.”

Hasna later discovered one employee was killed and another was in critical condition.

In the hospital, Mariam Atweh, 21, watched over her husband Abdullah, 31, whose arm was mangled by shrapnel.

“They say they are Muslims, like us. But they treat us like the enemy. What are they doing?” she asked.

The Lebanese army said the bombers drove vehicles packed with explosives and mortar shells to maximize the damage.

The explosions seriously damaged the white facade of Iran’s cultural center, despite blast walls recently erected around the building. The state-run Lebanese news agency quoted the Iranian Embassy as saying no diplomats or workers were wounded. But one wounded man in the hospital said he was an Iranian Embassy worker.

The explosions came a few days after Prime Minister Tammam Salam formed a new cabinet to end almost 11 months of paralysis. He described Wednesday’s attack as “a message by forces of terrorism to continue in their plan to spread death in Lebanon.”

“We will respond to it with solidarity and our commitment to peace,” he said.

Two visiting U.S. senators, Tim Kaine of Virginia and Angus King of Maine, condemned the latest spillover of violence from Syria’s civil war. “We hope the formation of the government will build some trust that will enable the country” to combat terrorism, Kaine said.

One of the deadliest attacks occurred in November when two suicide attackers blew themselves outside the Iranian Embassy in Beirut, killing 23 people and wounding dozens. The Abdullah Azzam Brigades claimed responsibility.

The group’s leader was captured by Lebanese authorities in December. He died in custody later in the month.