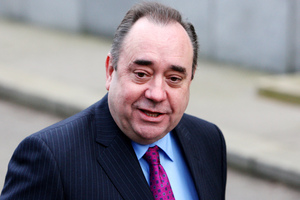 An independent Scotland would find it extremely difficult if not impossible to join the European Union, the President of the European Commission has warned.

Jose Manuel Barroso suggested that Scotland would be unlikely to get the unanimous agreement of EU states to join.

His comments are damaging for Alex Salmond, First Minister of Scotland, who has put membership of the EU at the heart of his plans for separation from the Union.

The Scottish Government has claimed that after a vote for separation, they would negotiate with the EU commission and member states for a “smooth transition” so that Scotland is a full EU member on independence day, marked as March 24, 2016.

It would mean the normally long process of EU accession would be fast-tracked in just 18 months. The Scottish Government argues the EU laws and treaties already apply to Scotland and so membership is a matter that should be negotiated “on the basis of the principle of continuity of effect”.

But Barroso, whose job includes being the “guardian” of EU treaties, said an independent Scotland must apply to join like any other state, and it is highly likely that some of the EU’s 28 members would object. Spain, which fears the separation of the Catalonia region, has blocked the accession of Kosovo, another newly independent state, Barroso said.

“In case there is a new country, a new state coming out of a current member state, it will have to apply and – this is very important – the application and the accession to the European Union would have to be approved by all the other member states,” Barroso said.

He went on: “It will be extremely difficult to get the approval of all the other member states to have a new member coming from one member state.

“We have seen that Spain has been opposing even the recognition of Kosovo, for instance. It’s to some extent a similar case because it’s a new country, and so I believe it’s going to be extremely difficult, if not impossible.”

The UK Government and pro-Union Better Together campaign have consistently rejected the claim that Scotland would get “accelerated” entry into the EU.