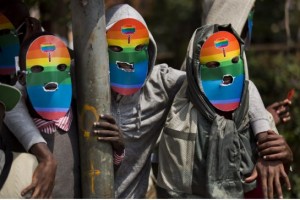 President Yoweri Museveni announced his decision to governing party lawmakers, government spokesman Ofwono Opondo said Friday. In Twitter posts, Opondo said the legislators, who are holding a retreat chaired by Museveni, “welcomed the development as a measure to protect Ugandans from social deviants.”

Evelyn Anite, a spokeswoman for the governing party, said Museveni promised to sign the bill after he reads a report he has received from Ugandan “medical experts” saying “homosexuality is not genetic but a social behaviour.”

Both officials said no date had been set for the signing.

Homosexuality already is illegal in Uganda under a colonial-era law that criminalizes sex acts “against the order of nature.”

Museveni has criticized gays as “abnormal” people who should be “rehabilitated.” But he had previously said he opposed the legislation that Parliament passed on Dec. 20.

The bill would allow life imprisonment for acts of “aggravated homosexuality,” defined as homosexual acts where one of the partners is infected with HIV, sex with minors or the disabled, and repeated sexual offences among consenting adults. The bill would make conducting a same-sex marriage ceremony punishable by seven years in prison.

Museveni has been under pressure within his own party to sign the bill since its passage.

Rights groups, including Amnesty International, had urged Museveni to reject the bill, which is popular among Christian clerics and lawmakers who say is necessary to deter western homosexuals from “recruiting” children in Uganda.

On Friday, the Human Rights First organization expressed “deep concern.” The law would have “severely adverse consequences for the human rights of lesbian, gay, bisexual and transgender people as well as other Ugandans,” it said.

“Unless this bill is stopped from becoming law, lives will be destroyed and countless people will be punished for an immutable characteristic,” said Chad Griffin, the group’s president.