For the world community February 14 marks the Valentine’s day, the day of love , but for Lebanon today is the 9th anniversary of the assassination of former Prime Minister Rafik Hariri. March 14 alliance is marking the loss of the former PM at the BIEL exhibition center in downtown Beirut .

The Lebanese Forces was represented by MP Sethrida Geagea .

The event kicked off with the national anthem at about 5 PM local time .

A video was shown on March 8 alliance with regards to the special Tribunal for Lebanon where a trial is currently taking place against 4 members of Hezbollah who were accused of being behind Hariri’s assassination.

Nazek Hariri, widow of the the slain PM addressed the gathering in a recorded speech.

Absent from the event for security reasons is Lebanese Forces leader Samir Geagea who survived an assassination attempt about 2 years ago and who is being spied on by a mystery drone .

Absent also from the event for security reasons is the son of the slain PM, former PM Saad Hariri, who is currently in self exile in Saudi Arabia.

Following the speech a video was shown on the assassination of the Cedar Revolution leaders.

March 14’s MPs announced Friday at the BIEL exhibition center in Beirut that they have decided to submit to U.N. chief Ban Ki-moon a petition demanding the expansion of the jurisdiction of the Special Tribunal for Lebanon to cover all the assassinations that targeted March 14 figures after Dec. 12, 2005 – the day MP Gebran Tueni was murdered.

Former justice minister Charles Rizk said during his address to the gathering.

“Violence has never reached this level in the Middle East and it is crossing our border while there is no state to deter it.” he added : “Rafik Hariri reminds us that we have no other choice but the state.” 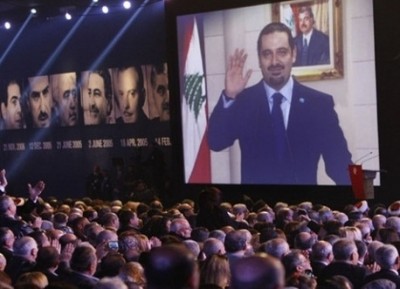 Former PM Saad Hariri said in addressing the gathering from exile :” When I walked into the STL courtroom, I felt that the sound of justice is more powerful than the blast that killed Rafik Hariri.”

He added: ” So many murder suspects run free in Lebanon, and yet they wonder why we demanded that the STL be set up?”. A possible reference to Hezbollah’s refusal to hand over the suspects who reportedly are hiding in the Dhahieh, a southern Beirut suburb.

He added: “I realize that some of us believe that our calm rhetoric does not help ease the anger brewing among us.”

“Some of you believe that we can no longer hold dialogue with sides that have spread regional unrest to Lebanon.” A possible reference to Hezbollah’s role in Syrian civil war and the bombings inside Lebanon that followed .

Hariri added: “Destruction is easy, killing is easy, and violating the state is easy. Is this the Lebanon that you aspire to?”

” The martyrs were not killed in order for Lebanon to become a safe haven for terrorism.” Hariri added.

” We do not drive our people to death, humiliation, and fear for the sake of foreign interests.” He said.

He added: The only way to confront the terrorism in Lebanon is for Hezbollah to withdraw from Syria.

Hariri wondered what Lebanon, the Shiite sect in particular, is gaining from getting involved in the conflict in Syria.

Hariri stressed that Lebanon’s stability is more important than anything and rejected claims that the Sunnis in Lebanon are seeking to isolate the Shiite sect.

He added: “Hezbollah does not want to listen to any other opinions . It wants to drag Lebanon towards wars that it has nothing to do with.”

He added:” The Future Movement will not become a mirror image of ISIL or the Nusra Front. Lebanon’s Sunnis will not be dragged into the war between Hezbollah and al-Qaida.”

” The Future Movement will not become a mirror image of ISIL or the Nusra Front. Lebanon’s Sunnis will not be dragged into the war between Hezbollah and al-Qaida.” Former PM Saad Hariri said in addressing the gathering

Addressing the issue of the upcoming presidential election he said

” We will only accept a president who rejects foreign hegemony, respects the constitution, and enjoys consensus,”