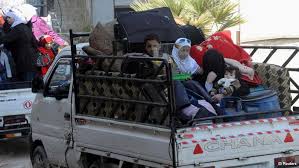 Syrian warplanes pounded a rebel-held town near the Lebanese border on Wednesday, activists said, as opposition leaders in Geneva called on Russia to put pressure on the government to prevent the faltering peace negotiations from collapsing.

A second round of talks that started in Geneva Monday is mired in acrimony as government and opposition delegates hurl accusations back and forth, unable to agree on a common agenda.

During a meeting with U.N. mediator Lakhdar Brahimi Wednesday, the opposition delegation submitted a paper containing their vision for a political transition. The proposal calls for the expulsion of all foreign fighters from Syria and a U.N. monitored cease-fire in Syria — but the Syrian deputy foreign minister dismissed it as a “show” and refused to discuss it.

The U.N. said that a meeting between senior U.S. and Russian officials — who are backing the process — with Brahimi will be held in Geneva Thursday, a day before it was originally planned.

The talks have been accompanied by a sharp rise in violence on the ground in Syria. The Britain-based Syrian Observatory for Human Rights said at least 4,959 people have died in Syria in the three-week period since Jan. 22, when the first round of talks began in Switzerland.

The group, which documents the fighting on the ground through a wide network of activists, says the period has seen the highest death toll since the uprising against President Bashar Assad started in March 2011. In a statement, it called for suspending the talks in Geneva if they don’t produce an immediate cessation of all military operations.

Troops on Wednesday pounded Yabroud — the last rebel stronghold in Syria’s mountainous Qalamoun region. Backed by Lebanon’s Hezbollah fighters, the Syrian army has been on a crushing offensive there since early December.

Activists reported heavy fighting in the area between troops loyal to Assad and rebels trying to overthrow him. The Observatory said warplanes have carried out 10 airstrikes so far on Wednesday.

In Lebanon, preparations were underway to receive more Syrians fleeing the area.

An Associated Press reporter in the border area of Wadi Hmaied saw several trucks and buses packed with people, clothes and other belongings rolling into Lebanon.

They were headed to the informal refugee settlements in and around the Lebanese town of Arsal to find shelter, but were turned back by other refugees saying there was no space to accommodate new arrivals.

Some erected tents in the sprawling fields to spend the night there. As night fell, many were seen putting children to sleep in the back of trucks parked on the side of a road.

“There was shelling, with planes and tanks since this morning,” said one refugee, who spoke on condition only his first name, Ahmed, be used, for fear of harassment.

He drove to Lebanon on a truck along with his mother, his wife and their four children. He said they fled the village of Sahel, located near Yabroud. As they drove away, Ahmed said he had seen the bodies of five people killed in the shelling.

A senior official with the Arsal’s administration told The Associated Press that up to 300 Syrians have crossed into Lebanon over the past 48 hours. He spoke on condition his name is not be used because he was not authorized to speak to reporters.

Yabroud has been controlled by the opposition for much of Syria’s nearly 3-year-old conflict. Lebanese Sunni Muslims have moved through the town to join Syrian rebels in battles against Assad’s forces, bringing in weapons and supplies for opposition fighters from across the border in Arsal.

Hezbollah fighters have been key to the Syrian army’s success in the border region.

In June, the Iran-backed group helped Assad’s forces regain control of the town of Qusair. Its fall tipped the balance of power in the Syrian conflict in Assad’s favor, though Hezbollah’s public involvement in the civil war next door deepened sectarian tensions in Lebanon.

In Geneva, opposition and government delegates said the opposition submitted a paper that contains its vision for a post-war Syria. The document obtained by The Associated Press calls for a transitional governing body that would oversee a U.N.-monitored cease-fire in Syria and the expulsion of foreign fighters fighting alongside both sides in the war. The document did not include any reference to the contentious issue of Assad’s future.

Lebanon’s Hezbollah and Iraqi Shiites have fought alongside the forces of Assad, who comes from a Shiite offshoot sect. The predominantly Sunni rebels, especially the more extremist Islamic factions, have fighters from many Sunni countries.

“The moment is crucial and we strongly believe that the political solution is the only way for resolving all problems in Syria: Ending violence, fighting terrorism and creating fair conditions for the future prosperity of Syria,” Gatilov said after the meeting with al-Moallem.

A trilateral meeting involving Gatilov, U.S. Undersecretary of State for Political Affairs Wendy Sherman and Brahimi is scheduled to be held in Geneva on Thursday to discuss the deadlock. The meeting was brought forward by one day although no explanation was given.