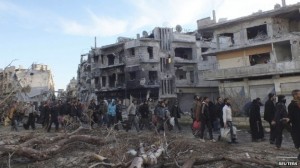 A standoff between Russia and Western powers left their rival Syrian allies deadlocked in talks at Geneva on Thursday as fighting went on that has left tens of thousands under siege and hoping for relief from abroad.

Russia said it had presented a draft U.N. resolution on fighting “terrorism” in Syria and its own plan for improving aid access, throwing down a challenge to Western states in the Security Council which proposed another formulation that Moscow said would open the way for Western military intervention.

In Geneva, where a second round of peace talks has made little progress since Monday, Western diplomats and the Syrian opposition delegates complained that President Bashar al-Assad’s government was refusing to discuss international proposals for a transition of power and hoped Russia would press it to do so.

Mediator Lakhdar Brahimi was meeting senior Russian and U.S. diplomats in Geneva on Thursday, hoping the three-week-old process’s co-sponsors could salvage negotiations which some Western diplomats said were already in danger of collapse.

U.S. Under Secretary of State Wendy Sherman and Russian Deputy Foreign Minister Gennady Gatilov were also expected to meet Syrian negotiators during their time in Geneva.

“What we have seen so far is that the regime is not serious,” opposition delegate Anas al-Abdah said. “The sooner the Russians can put enough pressure on the Syrian regime side, the better. And they are positioned to do that.”

Western diplomats also said they hoped Moscow could apply pressure on the Damascus government to do more to compromise. If not, some feared a planned third round of talks might not follow any time soon after this week’s discussions are completed.

Opposition activists say the rate of killing has increased in the three weeks since talks began – averaging a record of more than 230 a day – as both sides have sought to shore up their bargaining positions by gaining territory.

On Thursday, activists said government forces dropped crude barrel bombs from the air on rebel-held areas around Damascus and Aleppo, as well as the town of al-Zara near Homs. There were clashes in Hama province near a highway, that rebels have been trying to block to cut the government’s supply lines.

Russia has been Assad’s most powerful international ally during the three-year-old conflict, using its veto in the Security Council to block bids to pressure him with condemnation or the threat of sanctions.

Moscow’s new push for a resolution condemning acts of “terrorism” is in tune with rhetoric from Damascus, which uses the term to describe all those fighting to oust Assad in the conflict that has killed more than 130,000 people.

The Syrian government delegation has resisted efforts to discuss a transition of power in Geneva this week, saying fighting “terrorism” must be addressed first.

“Terrorism is certainly no less acute a problem” than the humanitarian crisis in Syria, Russian Foreign Minister Sergei Lavrov told a news conference on a visit to Egypt. He added that “terrorist groups” fighting there were a growing threat.

He accused Western countries that have lent support to the opposition and rebel groups, which are fighting alongside al Qaeda and other Islamist militants, of “de facto attempts to justify terrorism” by arguing it cannot be eradicated from Syria as long as Assad remains in power.

The National Coalition, Syria’s main opposition group, which is backed by the West and began talks with a government delegation in Geneva last month, accuses Assad of supporting terrorists on the ground in Syria as he fights the rebels.

In the city of Homs, a key battleground for much of the war, the evacuation of hungry civilians and rebel fighters from the besieged old quarter was continuing for a seventh day and a ceasefire was extended until Saturday, the governor said.

In all, 1,400 people had been evacuated since Friday, when a U.N.-brokered ceasefire came into force. It was an early achievement of the Geneva process begun on January 22.

Of these, 220 were still being detained for questioning. While women and children have been free to leave, men and youths aged between 15 and 55 are deemed of fighting age by the Syrian authorities and are being vetted by the security forces.

A U.S. State Department spokesman said on Wednesday that the government had pledged to release men after screening.

At an assembly area where evacuees were being registered on Wednesday, journalists found surrendering rebel fighters and Syrian security forces personnel voicing varying degrees of hostility, suspicion, fear and also a willingness to reconcile.

As a bus carrying evacuees arrived, Syrian Red Crescent workers formed a human corridor so they could walk unhindered to a building where they would be searched before receiving a meal comprising a banana, an apple, a piece of meat pie, a croissant and two small packets of biscuits.

Amnesty International urged the United Nations Security Council to overcome its differences and act to help the up to a quarter of a million Syrian civilians stuck under siege.

Survivors from Homs told of cigarettes costing $30 a pack and of food unobtainable. Some spoke of people dying after foraging poisonous weeds. One man said he had cooked and eaten a cat, saying: “It tastes like any other meat.”

Top Photo: The  Syrian army’s siege of rebel-held areas in the Old City of Homs has lasted more than a year