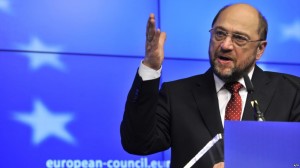 The visiting president of the European parliament landed in hot water in Israel on Wednesday, drawing a public rebuke from Prime Minister Benjamin Netanyahu over an address to the Israeli legislature.

Martin Schulz, a German who spoke to the Knesset in his native language, sparked a walk-out by several far-right lawmakers when he cited what he described as unverified data alleging Israel was denying Palestinians a fair share of water in the occupied West Bank.

He said a “Palestinian youth” had asked him why Israelis received four times as much water per capita as Palestinians.

“I haven’t checked the data,” Schulz said in the speech. “I’m asking you if this is correct.”

Legislators from the Jewish Home party, which advocates annexing parts of the West Bank, stormed out, and one shouted “shame on you” at Schulz.

He said that according to Israel’s own statistics and data it received from the Palestinian Authority, the water disparity cited by Schulz was incorrect and significantly smaller, although the Israeli leader did not give any precise numbers.

“Now, the European parliament president said honestly, ‘I haven’t checked it’ – but that didn’t stop him from repeating (the figures) and making an accusation,” Netanyahu said.

Such behavior, he said, reflected a general trend to “tarnish Israel” over its policies without checking the facts.

Israel’s B’Tselem group, which monitors human rights in the West Bank, said last month per capita water use in Israel is three and a half times higher than in the West Bank, a ratio close to the one mentioned by Schulz.

Netanyahu also suggested Schulz had a skewed view of events in Iran, whose agreement with world powers to curb some of its nuclear activities in return for an easing of sanctions is seen by the Israeli leader as an attempt to gain time to develop atomic weapons capability.

“Again, the president of the European parliament said that ‘until recently’ – that’s what he said – cries of ‘Death to Israel’ were heard in Tehran,” Netanyahu said.

“‘Until recently’ – that means that we don’t hear that now. But we hear the calls of ‘Death to Israel’ every day, or every two days from Iran’s leaders…”

Israel, widely believed to be the Middle East’s only nuclear armed power, demands that Tehran dismantle all of its uranium-enriching centrifuges and describes Iran as an existential threat. Iran denies it is seeking atomic weapons.