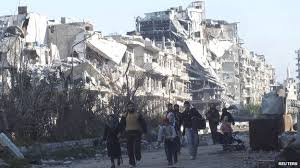 Syrian authorities have detained 336 men who left Homs and are still questioning most of them without direct supervision by any neutral third party, the United Nations said on Tuesday.

The men, deemed to be of fighting age by the Syrian authorities, were among 1,151 who left the besieged rebel-held Old City of Homs during an agreed ceasefire that was extended for a second three-day period on Monday.

Forty-one of the men have been released, but the rest are being questioned in a school, under the “general monitoring” of UN protection staff from the UN refugee agency UNHCR and the UN children’s agency UNICEF, UNHCR spokeswoman Melissa Fleming said told a briefing in Geneva.

“We’re in the facility, we know every person that is there. We are speaking to them separately themselves. But these are interviews that the UN is not necessarily privy to. These are security screening interviews,” Fleming said.

“Mostly what we’re asking about is we’re concerned in general about how they’re faring, what’s their health situation, what are their concerns,” she said.

“We ask them questions about the humanitarian situation that they left behind which is information that is very critical to us in passing to the colleagues who are doing the distribution inside the city.”

Rupert Colville, spokesman for the UN human rights office, said any evacuee, including those who had laid down their arms, must be protected from acts prohibited under international law, including cruel treatment, torture and humiliating and degrading treatment.

“We are also deeply concerned to learn that a number of boys and men and their families were seized by the authorities as they left the besieged area. It is essential that they do not come to any harm,” he said.

The UN-brokered “humanitarian pause” between 6 a.m. and 6 p.m. local time has enabled aid to get into the old quarter of Homs, which has been surrounded by President Bashar al-Assad’s forces for more than a year and a half.

The evacuees included five women in the late stages of pregnancy, including one who was in labour and gave birth in hospital shortly afterwards, said World Health Organization spokeswoman Fadela Chaib.

Many of the others had skin diseases, she said.

“A man said he survived for a week with one spoon of bulgur,” she said, adding that the small amount of bulgur available in the besieged area was infested with insects.

“They said that daily they survived on leaves, grass, olives, and sometimes some wheat flour appeared and they were mixing flour with water to make a kind of bread.”

The ceasefire deal originally stipulated that only women, children and men over 55 years of age would get safe passage.

But on Sunday, the governor of Homs said anyone could leave, though men aged between 15 and 55 would be questioned and put through a “judicial process”, which could include an amnesty.

Opposition activists have expressed concern that some Homs evacuees, particularly men, could encounter dangers such as those faced by residents who fled the besieged rebel-held town of Mouadamiya, near the capital, Damascus, in October. Dozens of men were detained, many of whom have still not been released.

Syria’s nearly three-year-old conflict has killed more than 130,000 people and forced six million to leave their homes. Many live in desperate conditions, with hunger an increasing problem.

The Old Homs ceasefire has been the first tangible result of the “Geneva 2” peace talks, in their second round this week.

The United Nations says it does not know how many people are still in Old Homs — just one of the many sieges that have trapped more than a quarter of a million Syrians. Assad’s forces have often used sieges to choke rebel-held areas. Rebels have sometimes done the same.