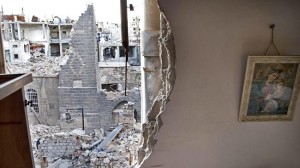 The evacuation is part of a surprise deal brokered by the United Nations between the two sides on Thursday after months of negotiations that will also see desperately needed aid delivered to the rebel enclave during a “humanitarian pause” in fighting.

But the first consignment of food and medicines will not reach the hundreds of civilians who have been under army blockade for more than 600 days before Saturday, Homs governor Talal Barazi told AFP.

The relief supplies had been held up in a UN warehouse in a government-held area of Homs just kilometres away from the rebel-held Old City while the negotiations for relief access dragged on.

At least 1200 children, women and elderly people are among some 2500 civilians who have been trapped under siege, surviving on little but olives, the Syrian Observatory for Human Rights says.

Mr Barazi told AFP that a joint team from the provincial government, the United Nations and the Red Crescent was already in the Old City to oversee the evacuation but that it was running late because of logistical hitches.

An AFP correspondent saw two buses, an ambulance and two Red Crescent vehicles enter the enclave as state television said the relief operation was under way.

“According to our advice from the UN, the number of people expected to leave today (Friday) is nearly 200,” Mr Barazi said.

“Tomorrow (Saturday), the first consignment of food and other relief supplies will reach those in need in the Old City.”

The rebel-held Old City and adjacent neighbourhoods have come under near-daily shelling since the army imposed a blockade in June 2012 after recapturing most of Homs in a counter-offensive launched that February.

In the first year of the uprising against President Bashar al-Assad’s rule that erupted in March 2011, activists had dubbed Homs the capital of the revolution.

But the bloody 2012 assault by the army confined the rebels to a small enclave in the city centre, which was further reduced in a new advance last summer after pro-government forces recaptured the town of Qusayr cutting off the rebels’ supply route to neighbouring Lebanon.

The enclave’s plight was on the agenda of long-awaited peace talks, between the government and the opposition in Switzerland last month, but the talks broke up without a hoped for agreement on access for relief supplies.

It was left to UN representatives in Damascus to broker the deal between the two sides.

The Syrian government had long insisted that they would allow civilians to leave but would not allow aid to be taken in.

Opposition activists in Homs told AFP that the rebels had agreed to observe a four-day ceasefire while the relief operation was under way.

The Syrian government had left open whether it would even attend a second round of peace talks due to open on Monday, but deputy foreign minister Faisal Muqdad finally confirmed on Friday that Damascus would take part.

“It has been decided that the delegation of the Syrian republic will take part in the second round of negotiations in Geneva,” state news agency SANA quoted Muqdad as saying.

“The Syrian delegation wishes to pursue the efforts it deployed during the first round in Geneva, and insists that the discussions focus on all clauses in the Geneva I communique, beginning with the first clause,” he said.

In the first round of talks last month, the two sides failed to agree on a single point despite persistent pressure from UN-Arab League envoy Lakhdar Brahimi, and co-sponsors Russia and the United States.

Damascus calls rebels “terrorists”, and insists that the priority in the Geneva talks must be to focus on “terrorism”.

For the opposition, the central point of the negotiations is the transition foreseen in the Geneva I communique.

It was adopted by world powers in 2012 but is ambiguous, in that it calls for an interim government but is unclear on Assad’s future, which Damascus insists is not up for discussion.

Top Photo: Under siege … An image of the Virgin Mary and baby Jesus hangs on the partially destroyed wall of a house belonging to a Christian family in a neighbourhood besieged by government forces in the central Syrian city of Homs.