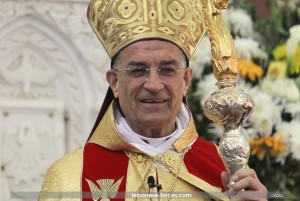 Former Lebanese PM and Future Movement leader Saad Hariri welcomed the National charter that was drafted by the Maronite church and announced by Patriarch Mar Beshara Boutros Rai on Wednesday , calling it a true expression of Lebanese coexistence.

“[The National Charter ] is an authentic Lebanese vision,” Hariri said in a statement on Wednesday.

“It expresses the truths of shared life among all the Lebanese.”

He added that “the Charter announced by the Patriarch Mar Beshara Boutros Rai must form a road map to build the state, protect national unity, support institutions and end the disintegration of the political and security situation from which Lebanon is suffering.”

Rai issued Wednesday a 33-point National Charter which “defines priorities that the Lebanese must hold on to for a better future,” as its preamble explains.

The charter stresses on preserving coexistence, respecting the National Charter, putting the higher national interest ahead of any other, engaging in internal dialogue and abiding by the constitution.

It also underlines the importance of the Baabda Declaration which calls for disassociating Lebanon from regional and international conflicts.

In announcing the charter Rai said electing a new president on time was a necessary condition for a strong state and warned that power-hungry politicians implicating Lebanon in regional conflicts were leading the country into the abyss.

Raid described the charter as as a roadmap for this critical stage in the history of Lebanon and the region. The Maronite leader also stressed the need for adherence to the three principles upon which the country was established: coexistence, the National Pact and Muslim-Christian partnership.

“Electing a new president as a new head of state within the constitutional deadlines is not debatable and it is a primary condition because its absence means an absence of the state and its future,” Rai said during a televised news conference.

Rai also outlined what he said were the growing concerns of Lebanese, saying the Maronite Church could not remain quiet as the country neared an “existential crisis.”

“The Lebanese should recognize that a national plan cannot be applied unless it produces a just, productive and capable state or else it will threaten the Lebanese entity,” Rai said.

“Those adopting self-security measures justify them by [highlighting] the inability of the state as well the people’s right to self-defense. This leads to a scenario wherein the strongest party imposes its choices on others and the other parties seek empowerment through foreign sides,” he said.

Rai added that such a scenario meant Lebanon was being dragged into the “war of axes” and experiencing an unprecedented, “dangerous political paralysis.”

“This is our biggest concern and so we warn the Lebanese, particularly officials, against continuing to exclude others, remaining obstinate and power hungry because that will only drive Lebanon to the abyss,” he said.

Rai said people were also concerned about “political practices [aimed at] quotas and authority rather than justice … leading to a struggle for power at the expense of the National Pact, sabotaging the Constitution and paralyzing the state in the interest of foreign axes.”

“One of the consequences of disrupting institutions is that rather than [seeing] the democratic practice of rotation of power, constitutional deadlines turn into crises,” he said.

Rai listed some of the consequences of disrupting institutions as being the inability to draft a new electoral law, form a government and “fears of a vacuum in the presidential post.”

The patriarch also criticized involving Lebanon in the matters of neighboring states without taking into consideration the repercussions on the country, reiterating his call for the adoption of “positive neutrality” toward the turmoil in the region.

“We identify with what some have said that complete neutrality … isolates Lebanon from issues around it and prevents it from being a part of regional dialogues aimed at coming up with solutions … Neutrality is the most successful means to preserve diversity in [made up] countries,” he said.

“For a neutral Lebanon to represent its [peaceful] message it should be strong enough to defend itself … and it should be at a distance from regional conflicts as stipulated in the Baabda Declaration,” he added.

The patriarch said the declaration was an important mechanism to prevent Lebanon from being used as a conduit for activities that could involve it in regional conflicts.

The 2012 agreement among the country’s political rivals could also be used to develop a needed national defense strategy, he said.

Lebanon, Rai also said, needed foundations on which a better future for the Lebanese could be built, saying officials should recognize the country’s highest national interest and resume National Dialogue sessions in order to resolve the current crisis.

The preacher also called for an end to the crisis in Syria through a national dialogue in which Syrians could decide their own fate.

“A speedy resolution to the crisis [in Syria] and the return of refugees to their land are vital Lebanese interests,” he said.

Rai concluded the charter with several priorities he said officials needed to take into account, namely adherence to the Constitution and ensuring the state enjoyed the exclusive right to the use of force.

“We must guard Constitutional principles by applying true equality between Christians and Muslims in governance and administration and equality in rights and duties,” he said.

“We need a serious commitment to building a strong state by preserving sovereignty, maintaining for the state the exclusive [right to] use of force, strengthening the Army and security forces, protecting an independent judiciary, imposing the rule of law and ending political meddling in the public sector,” the Maronite leader said.

Among the other priorities Rai listed were the drafting of a new elections law, adoption of administrative decentralization and adherence to the Taef Accord, Lebanon’s amended Constitution.

“We should also look into clarifying and improving the Taef Accord in order to fill the gaps in the president’s prerogatives so that the president can ensure the stability of the system and [that there be no] paralysis as demanded by the Constitution,” he said.