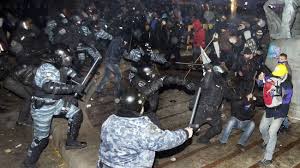 Ukraine’s President returned to work Monday after four days of sick leave as neighbor Russia called on protesters who have tried to curb his powers to stop their “threats and ultimatums.”

President Viktor Yanukovych, who went on sick leave last Thursday for “acute respiratory disease,” is seeking a way out of a deepening political crisis that has paralyzed Kiev, the capital.

Thousands of anti-government demonstrators have packed Kiev’s Independence Square since November, underscoring tensions in a country split between pro-European regions in the west and a more Russia-oriented east.

Last week, in the first concessions made by the government, the Prime Minister and Cabinet resigned, a controversial anti-protest law was repealed, and Yanukovych signed off on a contested amnesty bill for anti-government protesters.

But opposition leaders, who have received backing from the U.S. and EU governments, are pressing for more concessions.

In a statement Monday, Russia’s Foreign Ministry told protesters who have set up tents and barricades in the central Independence Square to halt their “provocative steps.”

It said one protest leader’s calls for street patrols and the blocking of public buildings “contradicted statements about the opposition’s commitment to the democratic and European values.”

“We hope the opposition in Ukraine will renounce threats and ultimatums and activate a dialogue with the government to solve the severe crisis,” the ministry said.

Yanukovych’s online press service said Sunday that he was now feeling “good” after treatment and his condition had been assessed as “satisfactory.” It said he would return to his desk Monday.

The government’s attempts to crack down on the protests appear only to have strengthened the opposition’s resolve. Violent confrontations flared after a sweeping anti-protest law was signed two weeks ago, followed by an uneasy standoff on the streets as the battle in the political arena has heated up.

Yanukovych has resisted calls for him to step down and defended the government’s handling of the political crisis.

However, opposition parties continue to call for constitutional reforms to shift power away from the President and say a new amnesty bill — which comes into force only if protesters vacate seized government buildings and unblock roads and squares — is unacceptable.

A special parliamentary session is scheduled for Tuesday.

Deadly clashes last month were an escalation of weeks of largely peaceful public protests prompted by Yanukovych’s decision in November to spurn a planned trade deal with the European Union and favor Russia instead.

He and Russian President Vladimir Putin agreed on a $15 billion deal for Russia to buy Ukrainian debt and slash the price of natural gas.

The violence on the streets has raised alarm among Ukraine’s neighbors and Western governments, who have been calling for a peaceful resolution to the unrest.

Western leaders last week also voiced growing concern about reports of the kidnapping and torture of opposition activists in the country.

One, the visibly battered Dmytro Bulatov, reappeared Thursday, more than a week after he went missing. He told reporters he’d been kidnapped and tortured by his captors — who, he said, “crucified me” by piercing his hands — before they dumped him in a forest.