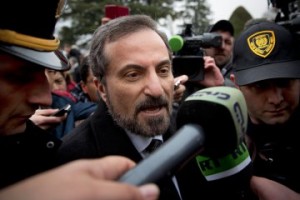 The first round of peace negotiations intended to plot a path out of the Syrian civil war concluded in Geneva on Friday with little to show for the effort. In a sign of just how low the expectations were, the fact that Syrian opposition figures and government officials sat down together for the first time was treated as a sign of success. But as the rival delegations head home before the expected next round of talks — starting perhaps as early as Feb. 10 — the opposition may have achieved an unexpected, if small, victory.

Not a single goal was met: there was no consensus on allowing humanitarian aid to reach besieged populations, no ceasefires struck and no substantive discussions over a way to end the war. It took four days just to reach an agreement about the goal of the talks — the establishment a mutually-agreed-upon transitional government — and then another day to argue about what exactly that meant. Regime officials maintained that Syrian President Bashar Assad should have a role in such a government, whereas the opposition delegation insists that Assad step down. The only proposal that had unanimous buy-in was the observation, on Thursday morning, of a minute of silence for the estimated 130,000 Syrians who have died in the war. Though there was some debate over who came up with the idea first.

Syrian officials will be able to go back to Damascus triumphant that they did not make a single concession. But that intransigence may yet be the regime’s undoing. Where government officials were imperious, accusatory and inconsistent, opposition representatives were generally gracious, calm and focused on their demands for genuine democracy and a denunciation of terrorism. In doing so the opposition, which has long been dismissed as incapable of true leadership, gained much-needed credibility both in Syria and abroad. In the months leading up to the talks, the Syrian government complained, with some legitimacy, that it had no real partner in the fractured opposition. The opposition’s performance in Geneva suggests the government does have a clear counterpart in negotiations.

The U.N.’s lead negotiator Lakhdar Brahimi said on Thursday that that he hadn’t expected to “achieve anything substantial” this time around. But if the opposition can continue to cement its credibility, Brahimi may be pleasantly surprised when the next round of talks resumes.

Photo: Louay Safi, center, spokesperson for the Syrian National Coalition, Syria’s main political opposition group, is surrounded by UN security as he leaves a press briefing at the United Nations headquarters in Geneva, Switzerland, Thursday Jan. 30, 2014. Syrian negotiators have resumed their peace talks involving U.N.-Arab League mediator Lakhdar Brahimi, a day after President Bashar Assad’s adviser rejected the opposition’s call for a transitional governing body. The opposition, which has long been dismissed as incapable of true leadership, gained much-needed credibility both in Syria and abroad during the Geneva 2 talks .(AP Photo/Anja Niedringhaus)