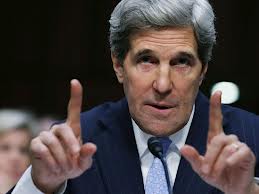 U.S. Secretary of State John Kerry said on Friday that Syria had no excuse for delays in ridding itself of chemical weapons, and urged it to move ‘very rapidly’ to allow them to be shipped out of the country.

Reuters reported on Wednesday that Syria had given up less than 5 percent of its chemical arsenal and would miss a deadline next week to send all toxic agents abroad for destruction.

Syria, where nearly three years of civil war have killed an estimated 130,000 people and forced millions to flee, has blamed delays on security obstacles. It said the mission could not be safely carried out unless it received armoured vehicles and communications equipment.

“Every indication we have is that there is no legitimate reason why that (removal) is not happening now,” Kerry told a news conference in Berlin.

“We want the Syrian regime to live up to its obligations and it is critical that very rapidly all those chemical weapons are moved from their 12 or so sites to the one site in the port (of Latakia) to be prepared for shipment out of Syria.”

Syria joined the Chemical Weapons Convention last year and is required to destroy its entire declared stockpile of 1,300 metric tonnes of toxic agents by mid-2014.

If President Bashar al-Assad failed to meet his obligations, Kerry said the United States and its allies would meet to consider which options “we deem necessary at this point to proceed forward”.

If President Bashar al-Assad failed to meet his obligations, Kerry said the United States and its allies would meet to consider which options “we deem necessary at this point to proceed forward”.

Earlier on Friday, Russia rejected the U.S. charges that Syria was dragging its feet and said the June 30 deadline for the elimination of the weapons remained viable.

Kerry, who is expected to hold talks with Russian Foreign Minister Sergei Lavrov at a security conference in Munich this weekend, said Moscow played a “critical role in helping the Syrians to understand their obligation of compliance”.