Mouawad: Cabinet policy must be base on Baabda accord 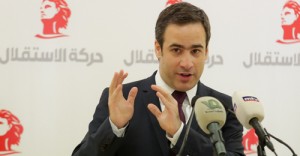 Lebanon’s Independence Movement leader Michel Mouawad stressed on Sunday that March 14’s acceptance to join a cabinet without a prior agreement on its policy statement would be a “major political mistake.”

“The independent figures in March 14 have played an important role in bridging gaps in the March 14 camp with a view to accepting participation, but that must take place according to clear principles based on including the Baabda Declaration ( accord) in the policy statement, removing the army-people-resistance formula and rejecting any text that legitimizes any weapons operating outside state institutions,” Mouawad said during a press conference adding” what we can’t get from Hezbollah before the cabinet is formed , we will never be able to get after the cabinet formation”

“The political principles are clear: The rejection to provide cover to Hezbollah’s fighting in Syria and operations outside Lebanese territory by including the Baabda Declaration in the policy statement with the aim of neutralizing Lebanon from the Syrian conflict,” Mouawad added.

He warned that “joining a cabinet with Hezbollah without prior agreement on the government’s mission and political principles … would be a major political mistake.”