by yalibnan
1172
As civil war rages on in Syria, Lebanon is being hit by wave after wave of human suffering. In this article Lebanese Prime minister Nagib Mikati is appealing to the world community for help
Share: 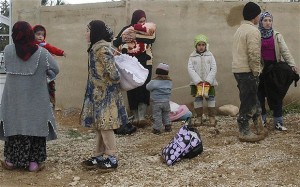 Lebanon is going through a critical time. These are not mere alarmist words but the grim reality of my country being left to bear the brunt of the refugee crisis caused by the three-year civil war in Syria. Unless world leaders meeting in Kuwait and Geneva back up their promises of assistance with action, the country risks losing the ability to sustain its humanitarian aid to displaced Syrians.

Lebanon is one of the smallest countries in the region, yet it has shouldered the biggest burden of the humanitarian crisis caused by the bloodiest uprising of the so-called Arab Spring. As we enter into a new year, the UN estimates that on current trends 900,000 conflict refugees will have entered Lebanon – approaching a quarter of the country’s pre-crisis population.

If the United Kingdom faced the same humanitarian crisis it would be the equivalent of three times Scotland’s population of 5 million crossing into England and camping out in the Yorkshire dales. In the US it would be equivalent to 100 million refugees.

If the United Kingdom faced the same humanitarian crisis it would be the equivalent of three times Scotland’s population of 5 million crossing into England and camping out in the Yorkshire dales. In the US it would be equivalent to 100 million refugees. Until now Lebanon has adopted a policy of never closing its borders to Syrian families seeking refuge. But as the uprising enters its fourth year, Lebanon can no longer cope on its own.

As the recent graphic news bulletins have shown, refugees are living in makeshift camps in the Bekaa Valley region in the winter snows – many lacking warm clothing and proper shelter, clean water and sanitation – with the risk now of disease spreading and adding to their plight.

Adding fuel to an already volatile situation in Lebanon, many have sought shelter in the remote borderline areas that are already suffering from poverty and development predicaments. In some sectors, like Wadi Khaled and Ersal, they outnumber the national residents…

Every day hundreds of Syrians are still fleeing the violence which continues with unabated ferocity. No country should be left on its own to cope with such a wave of human suffering.

Since becoming Prime Minister, I have initiated a policy of disassociation from all ongoing Arab-Arab tensions – with the aim of keeping Lebanon out of the conflicts destabilising the region.

The Middle-East is witnessing one of the most tumultuous times in its history: the amount of rapid change and challenge, and of growing dangers and complex threats, is truly unprecedented. Arab societies and political systems are literally involved in a struggle for their continued existence.

Lebanon, given its geographical position, is bound to be affected by these turbulent times. As prime minister, my main concern is Lebanon’s unity and safety and that it be spared from what is happening elsewhere in the region. The adoption of the disassociation policy by all factions here will prevent sectarian tensions and political strife. I will take this opportunity to call on international leaders to perceive Lebanon as the beacon of hope for freedom and pluralism in our region.

Alleviating the humanitarian crisis facing the refugees remains our immediate priority at the Kuwait and Geneva conferences. But there are dangerous signs that the conflict is now spreading beyond Syria’s borders, threatening to destabilise Lebanon and the wider region.

The recent security incidents in Beirut, including outside the Iranian embassy and the assassination of the former Finance Minister Mohamad Chatah, have increased fears of dragging Lebanon back into the abyss of sectarian strife.

The UN must now step up efforts to bring both sides in Syria to the negotiating table to end the bloodshed and achieve a political settlement. All the key players regionally and globally should be there – and time is running out to avert catastrophe that could overwhelm the region.

My central belief is in finding the right workable solution. It is based on the Wasatiya (centrism) doctrine that allows freedom of thought and adopts liberal values of equity, tolerance and pluralism.

This approach can bring hope of a brighter future to a troubled region. But time is running out to avert catastrophe.

In the meantime the plight of the refugees must not be overlooked. At the Kuwait and Geneva II peace conferences the Lebanese Government will outline its Crisis Management Strategy to address the Economic and Social Impact of the Syrian Conflict on Lebanon in the form of a Lebanese, World Bank and UN initiative for a $1.6 billion fund. The fund will help set up required assistance to the displaced and hosting communities and work with global agencies and state ministries to tackle the humanitarian crisis.

Financial aid – while welcome and vital – is not enough. We urgently need support for the 2014 Lebanese response plan including a commitment from the international community to securing safe zones for refugees within Syria itself.Lebanon cannot take any more displaced people. The huge influx of refugees is threatening the country’s economic and social stability, placing huge strains on an already overloaded health system.

Financial aid – while welcome and vital – is not enough. We urgently need support for the 2014 Lebanese response plan including a commitment from the international community to securing safe zones for refugees within Syria itself.

Lebanon cannot take any more displaced people. The huge influx of refugees is threatening the country’s economic and social stability, placing huge strains on an already overloaded health system. According to the World Bank overcrowding and lack of water and sanitation systems is bringing risks of epidemics of waterborne diseases, measles and tuberculosis.

Historically Lebanon has been a land of refuge for people fleeing persecution, so my country has a long and troubled history of housing displaced people. We still have the descendants of Palestinians who fled their homes in 1948 after the occupation of Palestine still living in camps across Lebanon. That is why it is vital that “safe” zones are created for the refugees in their own country – Syria – rather than establishing what could become another set of permanent camps in Lebanon for displaced people.

The impact of the Syrian conflict is challenging an already delicate inter-communal balance in Lebanon, with overcrowding, saturation of basic services and competition for jobs increasing social tensions.

Thousands more young unskilled Lebanese are expected to become unemployed, doubling the jobless rate to over 20 per cent while by the end of this year another 170,000 Lebanese will be pushed into poverty, adding to the one million already below the poverty line.

The international community cannot stand aside. It must be proactive and prevent the collapse of a small country that cannot alone carry this colossal weight.

This is not an internal Lebanese crisis, nor should it be treated as if it was a tragedy caused by a natural disaster like an earthquake or a tsunami. It is potentially a universal disaster and a threat to regional stability.

We expect nothing less than the unconditional support of the international community to Lebanon.

The time to act is now.