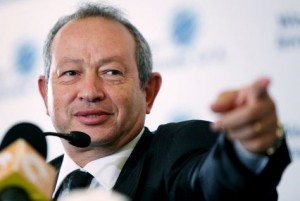 The plush Cairo offices of Egypt’s official investment authority were alive one recent morning with what authorities here say is the activity of an economy on the mend.

A wealthy Kuwaiti businessman had been whisked in with his entourage to announce plans to invest hundreds of millions of dollars in Egypt’s tourism and agriculture sectors.

“This is the right time to invest in Egypt,” Kutayba Alghanim, chairman of the multinational conglomerate Alghanim Industries, told reporters. “I see Egypt is now in good hands.”

The return to power of the political and economic class aligned with the regime of former strongman Hosni Mubarak is spurring billions of dollars in investment and assistance from Persian Gulf governments and businesses that approved of the Egyptian military’s ouster last summer of Islamist President Mohamed Morsi and the crackdown on his Muslim Brotherhood. Now, the government is harnessing the funds to boost growth — at just 2 percent in 2013 — through a multibillion-dollar stimulus package and is aiming to reduce the country’s whopping budget deficit.

But the resurgence of the moneyed elite of the Mubarak period is raising fears that they will again preside over an economic order that, despite an expanding economy in the final years of the autocrat’s presidency, encouraged the crony capitalism and stark inequality that helped stir the 2011 revolt that led to Mubarak’s resignation.

That commingling of business and politics, often at the expense of a population that remained trapped in searing poverty, cemented widespread resentment toward Egypt’s decades-old authoritarian system. And now some businessmen and officials implicated in post-uprising corruption probes are again in positions of power and influence, including in the cabinet appointed last summer by the military.

The business elite “are regaining power, and the regime is giving them leeway” to operate, said Tamer Wageeh, economic researcher at the Egyptian Initiative for Personal Rights, who has tracked Egyptian and international investigators’ efforts to close in on the offshore assets and finances of the Mubarak family and its allies.

Some Mubarak-friendly tycoons had been willing to work with the administration of Morsi, and vice versa, Wageeh said. But although Morsi’s administration was suspected of benefiting from Mubarak-era practices by co-opting corrupt state organs and wooing some of the corporate class, there was at least a public effort to pursue legal action against some businessmen.

Now, the swift return of the elites to the pinnacle is reinforcing the sense of deja vu that has settled over Egypt, deflating hopes that the corroded economy, which plunged into crisis under Morsi and inflamed the public, will soon improve.

“Now they are allied with this regime,” Wageeh said of the old business elite, “and are feeling happy and secure again.”

Today’s political climate is particularly favorable for the coterie of business barons and their bureaucrat allies who lay low under Islamist rule, analysts and economists say. The cabinet is stacked with Mubarak-era officials from the country’s security and investment bodies, as well as from Mubarak’s notoriously corrupt National Democratic Party, which was dissolved in 2011.

The Mubarak-appointed chief executive of Arab Contractors, a construction company whose employees are accused of helping Mubarak and his sons squander public funds earmarked for upgrades to Egypt’s presidential palaces, now holds the housing and urban development portfolio. And Petroleum Minister Sherif Ismail, while not accused of corruption, maintained until last month his position as chairman of the state-run Ganoub El Wadi Petroleum Holding Co.

Outside the cabinet, the former co-chief executive of investment bank EFG Hermes, Hassan Heikal, resigned in October to consult for the government on fiscal and economic policy. He is facing federal charges of insider trading.

Billionaire business mogul Naguib Sawiris — who publicly supported the grass-roots Tamarod movement that spearheaded the anti-Morsi rebellion and who backs the military-led government — announced in November that he planned to invest $1 billion in the economy once elections were underway. On Wednesday, the stock price of his company, Orascom Media and Technology, surged to its highest level since July 2012 after reports that Egypt’s new constitution passed with overwhelming approval.

Also on Wednesday, the construction company owned by Sawiris’s brother announced that it had suspended payment to the Egyptian government on a tax settlement brokered by the Morsi administration while it appeals to have the deal overturned. Both brothers have been investigated in the past for corruption and tax evasion.

“Those who were punished under Mohammed Morsi are getting their own back,” Farah Halime, a former fellow at the European Council on Foreign Relations, wrote last fall on Rebel Economy, her blog on post-Arab Spring economies.

In an interview, Halime said, “What we need to be talking about is reform . . . or we’re just going to end up back where we were 2½ years ago” before the uprising.

Economists say there is an urgent need to restructure the country’s bloated subsidies system and curb rising inflation. Also crucial, Halime said, is regulation of the “leaky banking system that allowed members of the old regime to hide wealth derived from corruption and crony capitalism.”

But with Mubarak-allied officials at the helm, the government appears uninterested in the structural reforms that would remedy the economy’s deep-rooted illnesses and improve the lives of Egyptians, economists say. Instead, many Egyptians and economists expect the government to lay the groundwork for an economic climate similar to the pre-revolt period.

“The [Egyptian] pound has been falling since before the revolution, and it will go down even further,” said Mohammed Mahmoud, 27, an electronics store owner in central Cairo.

The pound’s weakness against the dollar has stymied Mahmoud’s ability to purchase electronics from abroad, raising prices for consumers. In the years immediately preceding the uprising, a similarly devalued pound benefited the country’s exports but made life increasingly difficult for Egyptians already grappling with soaring inflation.

“As long as they are the same people [in power], should we believe anything will change?” Mahmoud said.

Abdel Waheb Mostafa, 36, who sells imported satellite television receivers at his shop in downtown Cairo, said the bribes he’s had to pay for years to officials at the Suez Canal Authority — a notoriously crooked administrative body that oversees the port where he receives his shipments — have skyrocketed in recent months.

Transparency International, a global anti-corruption watchdog, ranked Egypt the 144th most corrupt of 171 countries in 2013, the first half of which was presided over by Morsi.

“I was with the people against Morsi, and I wanted him removed so we could have new presidential elections. But now I know there is no plan to fix the country,” Mostafa said.

Clothing merchant Mohamed Farooq said his family is feeling the pinch at the dinner table.

“Food is more expensive now — chicken, fish, meat. We have changed the way we eat and the amounts we eat,” he said. “We don’t know where all the [aid] money to the government is going.”

Photo: Naguib Sawiris, who established the largest mobile phone operator in the Middle East in 2001, Orascom Telecom, has founded his own political party Al Masryeen Al Ahrar (The Free Egyptians).He served as a Board member of the Supreme Council of Sciences and Technology formed by a presidential decree issued by the former Egyptian President Hosni Mubarak. He announced last November that he planned to invest $1 billion in the economy once elections were underway.